‘Woman of Distinction’ praised for advocating for needy families 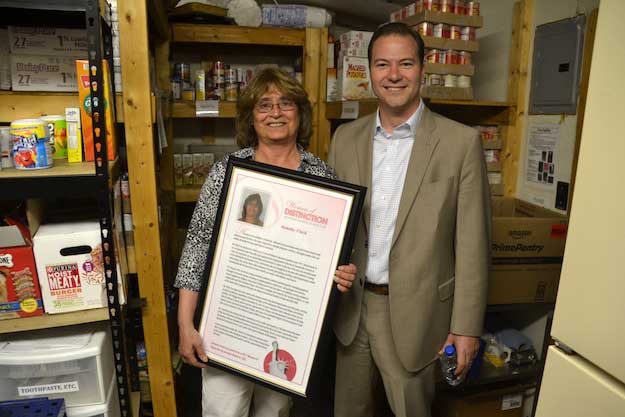 Photo by Tom Rivers: Annette Finch, director of Community Services for Community Action of Orleans & Genesee, is pictured in the food pantry at Community Action with State Sen. Robert Ortt, who picked Finch to receive the “Woman of Distinction” award for the 63rd Senate District, which includes all of Niagara, Orleans and part of western Monroe counties.

ALBION – Many of the “Women of Distinction” recognized in the State Capitol each year are leaders of businesses, high-powered political figures, college presidents and others in the limelight.

State Sen. Robert Ortt said Annette Finch, who has spent 40 years working with needy families, deserves the same status as the other Women of Distinction.

Ortt picked Finch to represent his Senate District as a Women of Distinction on May 9 in Albany.

He also stopped by Community Action on June 9 at her office to celebrate the award with her colleagues.

Ortt said Finch and Community Action do important work for many local families.

Among Finch’s responsibilities, she assists individuals with emergency services, job training, clothing, and transportation, while ensuring clients are treated with dignity and respect. She works diligently to provide programs, services, and opportunities that can enable all people to reach their fullest potential in becoming self-sufficient.

For 40 years, Finch has compassionately worked to initiate and develop life-changing programs through Community Action, including its garden projects, thrift store, care packages for veterans, school supplies for children, the annual holiday basket, and coat drives.

In addition, she has worked in conjunction with the Salvation Army’s Red Kettle campaign and camp for families and children in need, as well as the work release program through the Albion Correctional Facility to help teach life skills, Ortt said.

“I believe in the mission,” Finch said about Community Action. “I love what I do. Working here is like being with another family.”

Finch has also been a long-time member of the Albion Recreation Committee, and also has served on the Rebuild Bullard Committee for Albion’s most popular park. She also has been active in the local women’s softball league for over 40 years as a player, coach and umpire.

“She doesn’t do what she does for an award,” Ortt said. “That’s why we picked the right winner.”