Photos by Tom Rivers: many of the parts of the Albion Main Street lift bridge have been removed. The trusses are scheduled to be removed to the north side of the canal on Wednesday.

ALBION – The much-anticipated removal of the trusses on the Main Street lift bridge is now scheduled for Wednesday.

That historic moment was set initially expected last week, and then was shifted to Tuesday (tomorrow). But the state Department of Transportation said the removal is now scheduled for Wednesday.

The trusses will be moved by a giant crane to just north of the canal on land owned by the State Canal Corp. Soon there won’t be a bridge over the canal for the first time since 1914. The historic span will get a major rehabilitation.

The bridge closed to traffic on Nov. 14 and isn’t expected to reopen for 18 months. Crane-Hogan Structural Systems in Spencerport is general contractor for the project.

In rebuilding the Albion bridge, Crane-Hogan will replace bridge decks and portions of the truss system with high-strength, galvanized steel; modernize mechanical and electrical components within the bridge’s lifting system; rehabilitate the bridge tower; install new bridge rails; and repaint the bridge in the current shade of green. 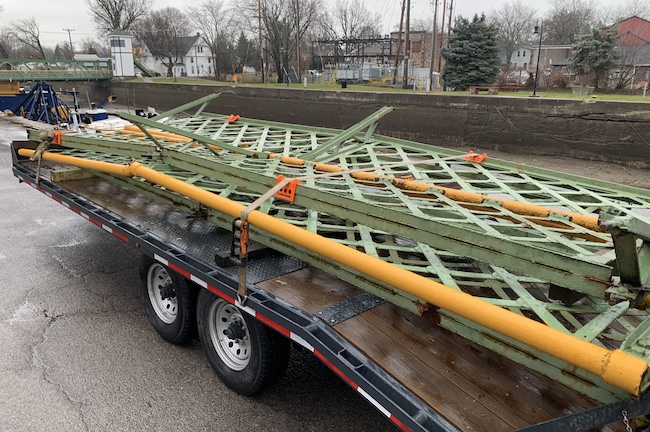 Sections of the walkway and railing are stacked up on a trailer.