Photo by Cheryl Wertman – Lyndonville first baseman Eric Neace gets the ball ahead of Roy-Hart base runner Matt Maines’ diving attempt to get back to the bag  during the Tigers win over the visiting Rams this afternoon.

Jumping out to a quick 4-0 first inning lead, Lyndonville went on to defeat visiting Roy-Hart 10-6 this afternoon in a non league baseball game. 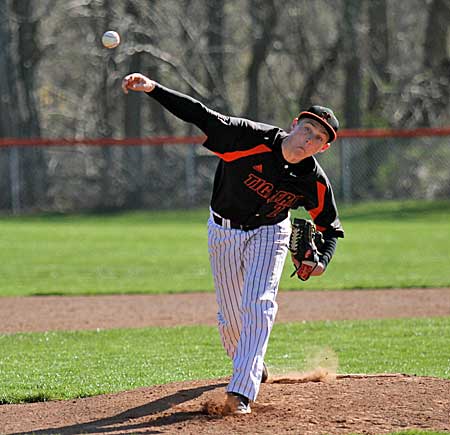 A  sacrifice fly by Joy and an RBI single by Johnson plated two runs in the third inning upping the Tiger advantage to 6-0. A single by Neace and a double by Wells set up that opportunity.

Roy-Hart cut the deficit to 6-2 in the fourth frame on a two-run double by Austin Walker but the Rams could get no closer. He had 2 hits on the day.

Lyndonville got one of those runs back in the home half of the frame as Nolan Donald doubled and came home on a single by Neace.

A single by Cody Bentley and a sacrifice by Donald added a pair of runs in the fifth and a triple by winning pitcher Jacob Hoffee, followed by a single by Neace, added another tally in the sixth.

Neace had a total of 4 hits as Wells, Johnson and Bentley each aded 2.

Hoffee allowed 4 hits and struck out 7 in six innings of work on the mound.

Improving to 4-1, Lyndonville next hosts Oakfield-Alabama in a Genesee Region League game on Thursday.

A three-run home run by John Bender in the first inning ignited Wilson to a 15-8 victory over Akron in a Niagara-Orleans League game.

Jonah Miller added 3 hits, including a double, as Wilson improves to 2-0 while Akron slips to 0-2.