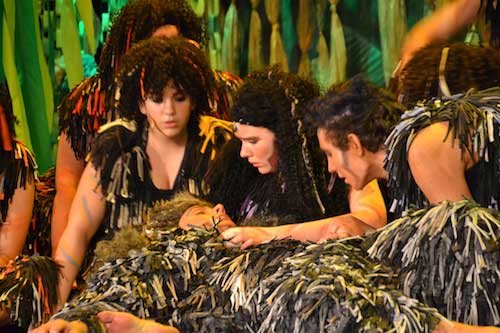 Photo by Tom Rivers: Kerchak, played by Victor Benjovsky, is killed by a bounty hunter. The other gorialls, including Kala (Matilda Erakare) mourn the loss in this scene from Tarzan.

As we watched the ACS production of Tarzan, there suddenly seemed to be a shortage of English superlatives, and it was easy to see why some who saw it Friday came back again on Saturday.

It is unlikely that anything I could say would do justice to the effort’s excellence.  In a more populated area, the show might have run for many weeks were it not for the reality of the school schedule. If there has been a better high school musical in Orleans County, I would love to know what it was.

One thing I do know, Gilbert and Sullivan it was not. Every aspect of the production was impeccably done, and the attention to detail incredible. The overall effect was essentially spellbinding. The fact that amusing lines often got little reaction was testimony to how enthralled the audience was with what it was experiencing.

If there were lines delivered without exquisite timing, diction, expression and, particularly in Jane’s case, enunciation in accent, there were very few. The characters were generally delightful. As captivated as one may have been—as I was personally within the first three minutes— one could understandably have missed a ‘hiccup’. A theater critic may have noticed one, or two. My wife and I did not.

Attempting to itemize what stood out is probably pointless. The characters were perfectly cast. It is hard to imagine their expressions, body language, gestures, deliveries and voices being much better in an academy of performing arts in a major city. Drama is hardly my thing, but, to me, the acting was superb.

The set, costuming and makeup, dance, acrobatics, music, solos and duets, and direction made Albion Central School’s performance of Tarzan a “perfect storm” spectacle, one unlikely to be forgotten by its audiences.

Congratulations to all involved for an event that had some of us so taken in as to be on the verge of tears—or otherwise emotionally engaged—from beginning to end.  As someone who loved teaching for thirty-four years, I would urge Gary Simboli to continue sharing his talents as a teacher for as long as he is able.