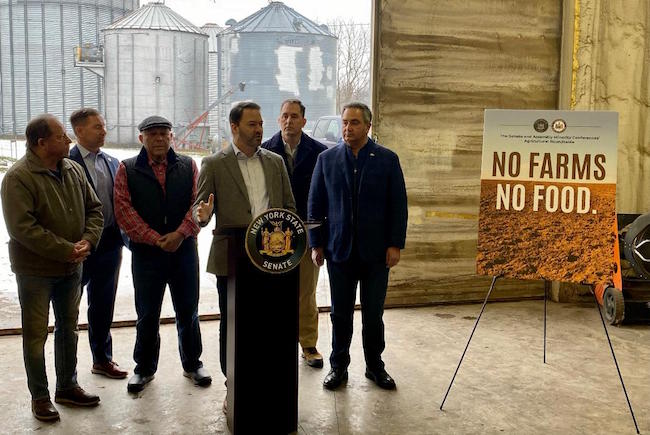 “The farming industry is vastly different from other work industries,” Ortt said. “Late last year, I and members of my conference sent a letter to the Farm Laborers Wage Board urging board members to vote against the reduction of the overtime threshold. Farmers here have advocated their concerns loud and clear: lowering the overtime threshold will jeopardize their livelihoods.”

This month, the New York State Farm Labor Wage Board will revisit the threshold set in 2019 and make a determination on whether to lower the threshold to 40 hours. Ortt said 96 percent of farms in New York State, most of which are family-owned, are unable to cover the costs of paying time and a half; a threshold reduction would result in less hours for employees to work and smaller paychecks. With farms being local economic engines, this Albany mandate would have devastating effects on communities across New York State.

In a letter sent by members of the Senate Republican Conference, legislators cited a recent study conducted at Cornell University. The study found that if the overtime threshold was lowered to 40 hours, two-thirds of our dairy farmers would have a negative impact on their operations, including leaving the industry or investing out of state, and half of fruit and vegetable farmers indicated they would decrease their operations or exit the industry.

“Despite all the obstacles that New York State has put in their paths, every farmer I know is dedicated to their work, to their farm and employees, and to producing high-quality products,” said State Sen. George Borrello, Ranking Member of the Senate Agriculture Committee. “As difficult as it has been for most to implement the new requirements of the Farm Labor Law, they’ve done what they always do in hard times: sacrifice more, work harder and adapt. However, if the overtime threshold were lowered to 40 hours, this already-strained industry would reach the breaking point, as a recent study by Cornell affirmed. With their ‘extra’ already depleted by burdensome and costly policies, even the most resilient of these New Yorkers would be forced to relinquish labor-intensive dairy or crops operations, relocate to other states or abandon agriculture entirely. I urge the members of the Wage Board to listen to researchers as well as those on the front lines, including farm workers, and reject any overtime changes. The future of farming and food security in our state hangs in the balance.”

“I have spoken with and toured numerous farms, farmers and farm workers do not want this change to be made,” said State Sen. Ed Rath. “They have made it very clear that this would not only negatively impact the farmers but the farm workers as well.  Our agriculture industry is already struggling, these overtime changes would only exacerbate the issue. I am hopeful that the voices of the farmers and workers will be heard in Albany and this disastrous change will be stopped.”

“The farmers I have met have great respect for the people who they employ,” said State Sen. Patrick Gallivan. “Like all small businesses, they value their employees’ commitment, work ethic, and the partnership it takes to get the job done.  Reducing the overtime threshold will have a devastating impact on the industry and does not accurately reflect the needs of farm workers or the needs of our farm families. Many family farms are already struggling economically.  We need to support them and the entire agriculture industry which is so vital to New York’s economy.”

“During a time of tremendous economic uncertainty and runaway inflation, the last thing the wage board should be doing is entertaining a proposal that would jeopardize the economic engines of our rural communities and the breadbaskets of our state,” said Assemblyman Steve Hawley. “Our farms simply cannot afford to absorb the projected 42% labor cost increase that would come with the lowering of the threshold and, beyond that, running a farm on a 40-hour a week schedule all year is simply impractical, if not impossible. A sudden and unforeseen severe weather development could mean a farmer’s crops, putting their livelihood on the line, and that’s a part of farming you simply can’t schedule into a 40-hour work week.”

“I voted against this matter when it came up in the Assembly because the negative impact it would have on our farms was clear,” said Assemblyman Mike Norris. “Farms across the state have been besieged by rising costs, including energy prices, various taxes, and rising labor costs as well as the addition of costly mandates from the state leading many farms, particularly small, family-run farms to close, consolidate or downsize operations. Now, with unprecedented inflation families are truly struggling to put food on the table and lowering the overtime threshold will only exacerbate and compound these rising costs and make it harder on families and businesses to stay afloat. We have people who want to work, are willing to work and there’s work to be done. This is not the time to limit hard work, entrepreneurial spirit and ingenuity by putting farmers and farm workers alike out of business.”

“We must recognize the difficulties that our farmers already face during the growing season,” said Assemblyman Angelo Morinello. “Crop harvests are mainly determined by weather, and it is usually a small window to get the product to market. Lowering the overtime threshold will just add another obstacle for farmers who already run on very thin profit margins. This will create a negative impact on the market and on small businesses in our state. We must not forget, if you ate today, thank a farmer.”