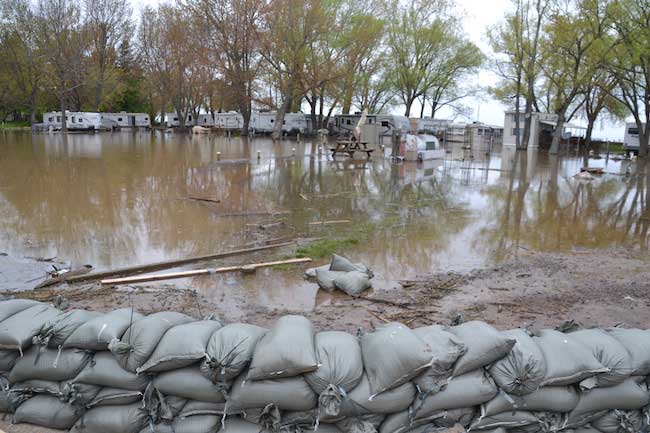 Photo by Tom Rivers: Sandbags were placed as a buffer from the spreading water at the Green Harbor Campground & Marina in Carlton in this photo from May 16. The high waters from Lake Ontario delayed the opening of the campground this year.

The State Legislature and Gov. Andrew Cuomo approved $55 million in relief for flooding victims from the high Lake Ontario, which was down from an earlier $90 million package.

Despite the $35 million reduction, State Sen. Rob Ortt, R- North Tonawanda, said the funding provides critical relief for property owners who have suffered for more than two months from the high waters.

“Residents, business owners, farmers and local governments impacted by the Lake Ontario flooding will be able to breathe a collective sigh of relief,” Ortt said in a statement today. “This bill provides up to a $50,000 grant per eligible homeowner, and keeps the focus on helping year-round residents, not on how much money they make. We also haven’t forgotten about seasonal residents, small business owners, farmers, landlords, not-for-profits and municipalities.

“The high water levels have posed a significant burden for individuals along the coast. I’m proud both houses of the legislature were able to work together to provide much needed relief to families devastated by the unprecedented man-made disaster, so that they can begin to rebuild.”

Gov. Andrew Cuomo said the $55 million is needed for the shoreline property owners.

“I’ve been up there several times and that situation is difficult and long-term,” the governor said in Albany today. “It’s not like a flood where it is several days and it’s gone, this has been weeks and weeks and weeks.”

The budget also incudes funds for portable dams to help stave off flooding. Two of those Aqua Dams were installed in Kendall on Wednesday.

“They are these large dams that can be filled with water and actually stop the water from coming onto property, roads, etc. so that was a very good piece of legislation in my opinion,” Cuomo said.

The state funding – a maximum $50,000 grant – will kick in after property owners tap federal assistance and insurance coverage.