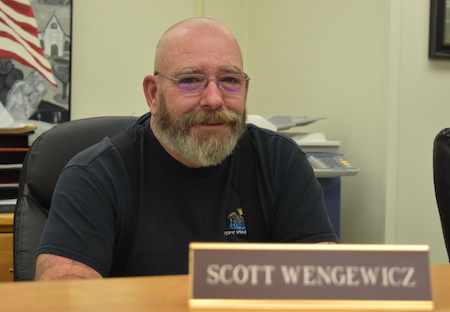 Photos by Tom Rivers: Scott Wengewicz started as the Shelby town supervisor on Dec. 13. He is pictured after Thursday night’s organizational meeting for the town, where appointments and salaries were set for 2023.

SHELBY – Scott Wengewicz, the new Shelby town supervisor, doesn’t have much interest in being involved in politics.

But he is willing to serve his town and community.

Wengewicz, 59, is retired from a 30-year career as a Border Patrol agent. He has opened two businesses in downtown Medina. Mystic Dragon’s Lair at 339 North Main St. started in February 2020, offering quartz, gemstones, crystals and other products.

Wengewicz also is a commercial beekeeper with 480 beehives.

He didn’t pay too much attention to Shelby town business until late summer with reports that Borrego Energy proposed two wind turbines at 633 feet tall on land owned by the Smith family on Route 63. Jeff Smith was the town supervisor at the time and recused himself from town deliberations on the matter.

The issue has proven been divisive in Shelby and drew packed crowds to town meetings, especially a hearing on Sept. 13.

Wengewicz watched that hearing through a video that was livestreamed. That hearing on Sept. 13 was adjourned and needs to be reconvened. Wengewicz wants to address the issue again but not until there is a full five-member Town Board. Ryan Wilkins, the former deputy town supervisor, also resigned soon after that hearing which was about possible environmental issues and impacts with the turbine project.

The board will soon do interviews for people who expressed interest and applied for the vacant councilman position.

“We want to get it done as soon as possible,” Wengewicz said about filling the vacancy.

Once there is a full five-member board, Wengewicz said he expects that public hearing will be completed and a review of the project will go forward.

The board also needs to fill another opening with the resignation of Dawn Keppler as town justice on Dec. 2 after being in the role since 1999.

Wengewicz said he wanted to address one of the main complaints about residents during the meetings about the turbines. Many said they didn’t know about the project and other issues facing the town.

Shelby now has a Facebook page for the town. As of this afternoon it has 653 followers. Wengewicz and Shelby officials used the page to provide frequent updates during the blizzard from Dec. 23-25.

The town also has an messaging system where people can sign up for texts and emails about emergencies or other important notices in the town. Click here for more information.

He is planning to be available to meet with community members at the Medina Senior Center and perhaps some Saturdays at the town hall, just so people can meet him and share some of their concerns. He wants to have those meet-and-greet opportunities because there wasn’t a public campaign for him to become the town supervisor.

Wengewicz already has had one surprise since taking office. He didn’t know there was any pay for the position. It comes with a $10,878 salary.

Shelby is still down one board member and will soon try to fill the vacancy following the resignation of Ryan Wilkins. Pictured from left (going over resolutions at Thursday’s meeting) include Town Clerk Darlene Rich, Town Supervisor Scott Wengewicz and Town Board members Steve Seitz, John Pratt and Ed Zelazny.

The Town Board approved appointments during the organizational meeting on Jan. 5, including: