‘Wilson’ was bred by Johnson Farms in Lyndonville 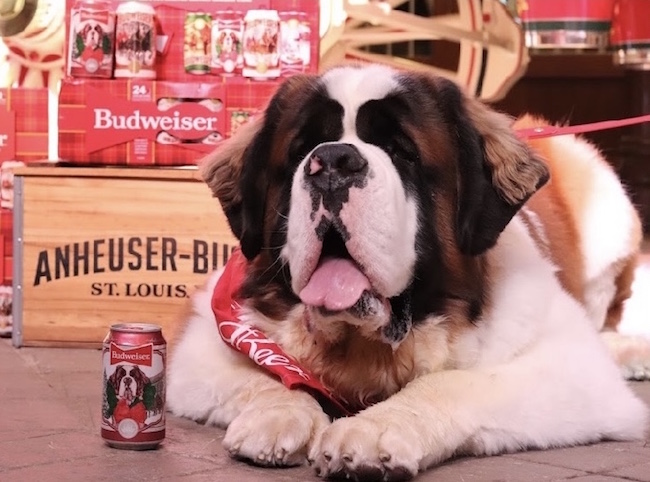 Photos courtesy of Clancy Johnson: Wilson, a Saint Bernard bred by Johnson Farms, is shown with a beer can featuring his face as part of nation-wide holiday promotion.

LYNDONVILLE – A happy dog on the can of Budweiser beer for a holiday promotion was bred by Johnson Farms in Lyndonville.

Wilson the Saint Bernard was chosen by Budweiser over about 100,000 other entries. He is nationwide this holiday season as part of a promotion for Budweiser.

“We were really excited about it,” said Clancy Johnson, owner of the Johnson Farms.

Wilson lives with a family in Liberty Township, Ohio. 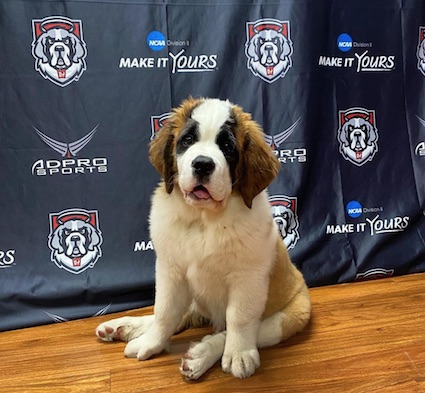 Johnson Farms also bred the two Saint Bernards – Saint and Maggie – that are the mascots at D’Youville College. The college in 2020 adopted the “Saints” as the mascot for the school. This photo shows Maggie.

The 160-pound dog is the latest celebrity canine bred by the farm. Two of their Saint Bernards were picked to be mascots for D’Youville College in Buffalo. That school announced in 2020 it would adopt “Saints” for its mascot as part of a move from Division III to Division II athletics. Those two dogs – Saint and Maggie – are very popular on campus and Maggie has an active social media account tracking her movements and work as a D’Youville goodwill ambassador.

Another one of the Johnson dogs was featured as Beethoven in the movie, Beethoven’s Big Break.

Her dogs also compete in shows around the country. Those events have catapulted Johnson Farms to one of the top breeders of Saint Bernards in the world.

Clancy Johnson has been running the business since 2002, not long after graduating from high school. Her parents, Jeff and Lynne Johnson, have owned Saints since 1976. Clancy Johnson also breeds Newfoundlands.

The farm has “great lines” of genetics in their dogs, and has connected with many leading breeders. She praised the handler and groomer for helping the dogs to excel at the shows.

The holiday promotion from Budweiser with one of their dogs faces is a fun confirmation they have been giving families quality dogs.

“My goal here is to produce the finest quality Saint Bernards and Newfoundlands,” Johnson writes on the business’s website. “Temperament is of the utmost importance. I am very active in conformation, obedience training and rescue work. I strive for correct health and structure, conforming to the AKC written standard.”