Republican leaders poised to back Sandy Church for county judge 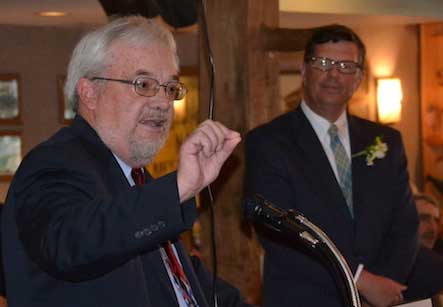 Photo by Tom Rivers: Sanford Church speaks at a retirement party on July 27 for James Punch, back right. Church has strong support to become the county’s next elected judge.

ALBION – Sanford Church, Orleans County’s public defender for the past two decades, is expected to get the Republican Party’s formal blessing next week to be the next county judge.

Sanford has the support of the local Republican leaders, said Ed Morgan, the county’s GOP chairman.

The county’s executive committee will meet Thursday, Sept. 14, and Morgan said they are expected to nominate Church for the position that was vacated with James Punch’s retirement on July 29.

The Republican chairman from the 10 town committees plus the county’s state committee representatives will meet next week to pick the party’s choice for judge.

“Sandy has a lot of support throughout the county,” Morgan said on Thursday.

The GOP leader also noted that Church has the backing of 18 attorneys in the county. That group includes the now retired Punch, District Attorney Joe Cardone, County Attorney David Schubel, Assistant DA Susan Howard and many others who have worked closely with Church.

He has practiced law in all of the courts a county judge will preside.

Church also served on the Albion Board of Education, as chairman of the Albion Historic Preservation Commission, a past director of Hospice of Orleans, past president of the Albion Rotary Club and current member of the Lions Club. He has been a long-time youth baseball coach, and just finished another season with the Rotary Lions team.