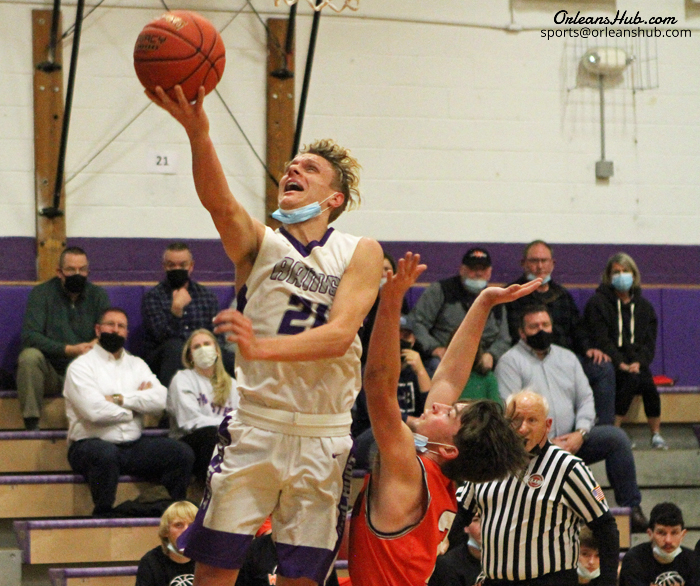 Photo by Cheryl Wertman – Roy-Hart’s Vincent Buscarino drives in for a layup against Wilson defender Mason Branca during the Rams Niagara-Orleans League season opening win over the visiting Lakemen this evening.

Roy-Hart jumped out to a 14-8 first quarter lead as Buscarino scored seven on a three, a layup and a jumper and Petrie made a three-point play.

The Rams maintained a 22-15 lead at the half and upped the advantage a bit to nine, 35-26, at the three-quarter mark.

Petrie scored 8 to lead the Rams in the third period while Babar netted 6 to keep the Lakemen close.

Roy-Hart extended the lead to 11, 40-29, early in the final period after a three by Buscarino and a rebound bucket by Petrie.

Putting together a 9-2 run including two rebound baskets by Fox and a three-point play by Bubar, the Lakemen sliced the Rams lead to just three, 44-41, with 17 seconds remaining.

However, Roy-Hart turned back the challenge as Buscarino made two clutch free throws with 16 seconds to go to help lock up the narrow win.