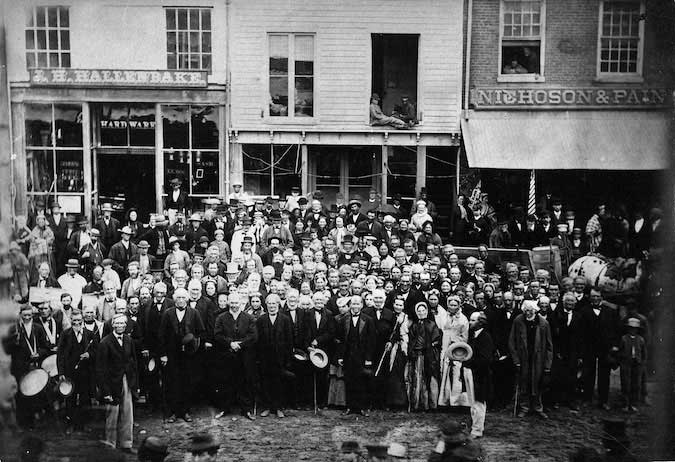 ALBION – On June 25, 1859, the pioneer inhabitants of Orleans County converged upon Court House Square in Albion with the purpose of establishing an historic association.

The Pioneer Association, as it was known, was formulated upon a motion made by the Almanzor Hutchinson of Gaines, which set forth the permanent appointment of officers for the organization. Robert Anderson of Gaines was selected as president, vice presidents representing the nine townships were elected including Lansing Bailey of Barre, Alexander Coon of Shelby, Jeremiah Brown of Ridgeway, Gardner Gould of Carlton, Samuel Tappan of Yates, Shubael Lewis of Clarendon, Robert Clark of Kendall, Walter Fairfield of Gaines, and Aretus Pierce of Murray, as well as Asa Sanford as secretary, and Dr. Orson Nichoson as treasurer.

Residency was a requirement for membership within the Pioneer Association; only those who resided in Western New York prior to January 1, 1826, were eligible for admittance. In 1862, those who descended from pioneers were eligible to join as junior members per an amendment to the constitution. Members signed a roll and paid an initiation fee of fifty cents, therefore agreeing to pay twenty-five cents each year after. The most interesting article within the organization’s constitution was Article VI which read, “The association, by a vote of two-thirds present at a regular meeting may expel any member for habitual intemperance or grossly immoral conduct.” It appears that during the first several years of the organization’s existence, over 275 members were enrolled, consisting of the county’s earliest settlers who broke the virgin wilderness to establish themselves in this new region.

This photograph shows the membership of the Orleans County Pioneer Association on June 19, 1869 standing on North Main Street in Albion. The building that reads “Nichoson & Paine” was a drug store that was operated by Drs. Orson Nichoson and Lemuel C. Paine; the building is currently occupied by Snell Realty. The photo was taken as part of the eleventh annual meeting of the association, called to order by the president, Lyman Bates. The Rev. Mr. Elias Bacon opened the meeting with a prayer and the constitution was recited by Bates.

At an early point in the meeting, George P. Hopkins, a local photographer, invited the group to have this photograph taken in front of his studio on Main Street. The meeting was adjourned until 1:30 p.m. and Col. N. E. Darrow led the group, accompanied by a “martial band” under the direction of Israel Shipman. After the photograph was taken, the group proceeded to the Harrington House where they enjoyed a large dinner, eventually returning to the court house for an afternoon session.

I was visited recently by Tom Taber who was seeking out an original of this particular photograph. He pointed out that this image is one of two distinctly different snapshots of the Pioneer Association, likely taken within moments of one another. As if the juxtaposed photographs were part of a “Spot the Difference” puzzle, one could make out minor adjustments to the posture and locations of various individuals in the photograph.

This visit along with a recent chat with Dale Blissett during my Memorial Day tour of Mt. Albion Cemetery spurred me to take a closer look at this impressive image. In a photograph this size, it is difficult to point out particular men or women, but we do see the familiar faces of Elias Bacon, Robert Anderson, Lyman Bates, Nicholas Darrow, Orson Nichoson, and Seymour Murdock, just to name a few. One individual, hidden within the mass of people, is David Farnham of Ridgeway, who led the choir of veteran pioneer singers at the conclusion of the meeting.

If we observe closely, we catch a glimpse of a young lad waiving his hat, as if to be noticed by the photographer. In the middle of the photograph, a man has extended his derby upon a cane, and another man in the rear holds onto a step ladder, as if he stopped to sneak into the crowd.

What this photograph does not show is that a crowd had gathered to observe this special occasion, the mass of people located along the west side of Main Street carefully cropped out by Hopkins. It is believed that the photographer would have directed his camera out of the second story window, where his studio was located, to grab this fantastic view. One can only hope that someday, a labeled version of this image will surface to tell us who these weathered faces belong to.