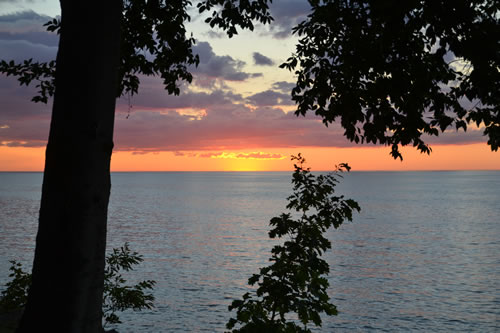 Photo by Tom Rivers – Lake Ontario is pictured at sunset in this photo last week at Lighthouse Christian Camp in Barker.

A Pennsylvania woman is back in the lead for the $4,000 grand prize in the Orleans County Fishing Derby, which continues until Aug. 21.

Julie Schaeffer is atop the leaderboard with a Chinook salmon weighing 30 pounds, 14 ounces. Schaeffer of Sligo, Pa., led the derby briefly with a 27-pound, 4-ounce salmon. But she was passed by Tom Shatzer of Chambersburg, Pa., who caught a 30-pound, 2-ounce Chinook.

But Schaeffer on Friday became the second person in the derby to reel in a 30-pounder.

There are $8,800 in prizes up for grabs in the derby, which is organized by the Albion Rotary Club.

Divisions leaders earn $500 prizes. Shatzer was bumped from the grand prize of $4,000, but he now leads the Salmon Division and is in line for the $500 prize.

The derby also includes a $200 bonus award for biggest fish caught by an Orleans County resident. Gerald Slack of Medina leads with a Chinook at 26 pounds, 13 ounces.