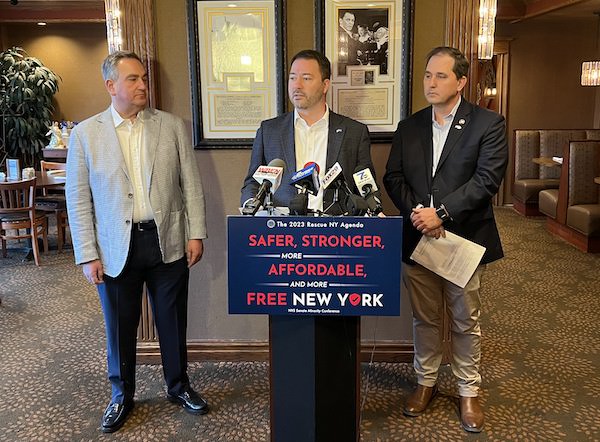 “Albany’s proposed gas stove ban is another assault on our way of life in Western New York,” said Senate Republican Leader Rob Ortt. “To dictate what types of cooking appliances our residents can or cannot own will hurt homeowners, home builders, and small businesses – especially restaurants that rely on gas cooking. At a time when the economy is unstable and many of our businesses are still struggling to get back on their feet, Albany bureaucrats continue making life even more difficult and expensive for the everyday New Yorker.”

Earlier this month, the Consumer Product Safety Commission announced they would be considering a ban on gas stoves, infuriating many. In New York, the Governor in her State of the State address revealed she was pushing for a similar ban on fossil fuel equipment in new construction statewide in New York – including gas stoves – starting in 2025 for small buildings (including single-family homes) and 2028 for larger ones.

Upon learning about the Governor’s proposed gas stove ban, many New Yorkers expressed outrage at the policy, which would harm homeowners, home builders, skilled laborers and businesses throughout the state.

One particular sector that would be devastated is the restaurant and hospitality industry. Countless restaurateurs have explained that using an electric stove top significantly slows down the workflow process for a chef in the kitchen, in contrast with gas stoves.

Another point that has been made is that when power goes out at someone’s home, gas stoves provide a reliable backup for cooking, and local restaurants that use gas are often called upon to feed community members with electric appliances. This was especially the case in Western New York in 2022, with the historic and deadly blizzard that pummeled the Buffalo-Niagara region during Christmas.

“The proposed ban on gas stoves underscores just how heavy-handed and intrusive New York State is prepared to be, in order to impose their reckless climate agenda on everyday New Yorkers,” Borrello said. “A gas stove ban would also devastate the restaurant and hospitality industry, which relies on the rapid precision that gas stoves provide for cooking. Unfortunately, practical realities and individual choice don’t carry any weight in this rush towards ‘green energy.’ This ban is just one of many sacrifices New Yorkers will have to make unless a more reasonable approach and timeline is implemented.”

“These proposals we are seeing out of Albany are not only out of touch but disastrous for Upstate and Western New York,” Norris said. “The reliability of natural gas, especially during our winters, is crucial. Many found relief during the recent blizzard by using gas stoves and fireplaces. To take this reliable, affordable form of energy away is extremely short sighted. I will continue to fight against proposals that are a blatant disregard to our community and residents.”

Last week, Ortt launched a petition to “Say NO to Albany’s gas stove ban.” So far, that petition has received more than 1,100 signatures.

Earlier this month, Leader Ortt and Senate Republicans unveiled the Rescue New York 2023 Legislative Agenda, which includes climate policies that would ensure access to affordable, reliable, and clean energy, among other proposals to create a more affordable New York.

“Just a few weeks ago, tens of thousands of Western New Yorkers spent days without power during a winter storm,” Ortt said. “Under this radical gas stove ban, any future power outages will leave our neighborhoods and businesses unable to cook food, boil water, or stay warm. These reliable and affordable stoves are vital to hundreds of thousands of Western New Yorkers. We cannot allow ill-conceived climate policies to get rammed through without input from everyday citizens.”