ALBANY – The Empire State Development Board of Directors today approved a total of $46 million in grant funds for infrastructure construction and development at the Western New York Science, Technology and Advanced Manufacturing Park (STAMP).

The site, located just south of Orleans County in the Town of Alabama, is currently being prepared for anchor tenant 1366 Technologies to build its first large-scale commercial Direct Wafer production plant and significantly grow its workforce.

The company, which develops and manufactures high performance silicon wafers for the solar energy industry, will create at least 600 new, full-time jobs and several hundred million dollars of private investment in the Finger Lakes region.

“With this approval, the GCEDC will be begin construction of the infrastructure required on site, including the necessary infrastructure for the new solar wafer manufacturing facility, 1366 Technologies,” said Steve Hyde, President and CEO of the Genesee County Economic Development Center.

The funding approved today for the Genesee County Economic Development Center (GCEDC) enables infrastructure work at the STAMP site to continue in preparation for the construction of 1366 Technologies’ production plant. 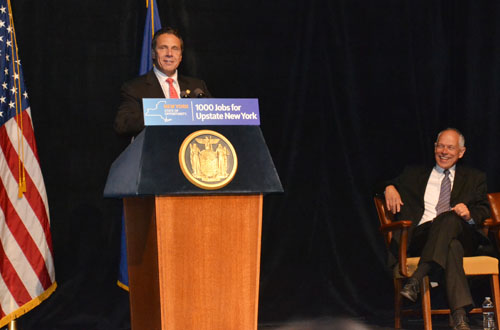 Photo by Tom Rivers
Last Oct. 7 at GCC in Batavia, Gov. Andrew Cuomo announces 1366 Technologies from Bedford, Mass., will build a new factory at STAMP, a 1,250-acre site in the Town of Alabama. Frank van Mierlo, CEO of 1366 Technologies, is pictured at right sharing in the announcement.

The project, announced by Governor Andrew M. Cuomo last October, will progress in phases, with 1366 Technologies initially building a 250MW facility that will ultimately be a 3GW wafer facility. Over the course of the multi-phase project, 1366 will invest approximately $700 million, including a $100 million initial investment, becoming the largest economic development project in the history of Genesee County.

These funds are part of the $56.3 million in total state incentives that were critical in securing 1366 Technologies commitment to build its factory in Upstate New York. The additional funds approved today, $28 million, are the remaining balance of a $33 million budget appropriation and are primarily for infrastructure construction at STAMP.

In November 2015, the ESD Directors approved $5 million for remaining land acquisition and engineering for roadway, electrical, water, sewer and wastewater systems. A portion of the remaining land parcels have been acquired and the engineering phase of the project is approximately 40 percent complete. The remaining funds needed to await completion of the State Environmental Quality Review Act (SEQRA) process, which has been completed and with today’s action by the ESD Directors the balance of the project can move forward.

1366 Technologies develops and manufactures high performance silicon wafers, the building block of solar cells and the most expensive component of a solar panel. The company’s revolutionary Direct Wafer technology transforms how the wafers are made and replaces a decades-old, expensive and wasteful manufacturing process with one elegant step. The result slashes the cost of a wafer by 50 percent. As a “drop-in” replacement for conventional wafers, 1366 Technologies makes it easy for cell and module manufacturers to strip out costs without adding complexity.