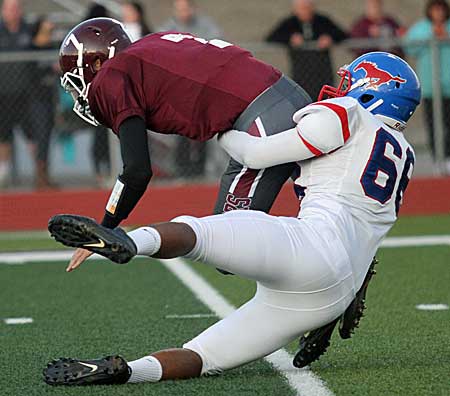 A long time foe will provide the opposition as Medina/Lyndonville celebrates the reopening of renovated Veterans Memorial Park by hosting Newfane at 7:30 p.m. Friday for a B-3 Division football game.

The summer long Phase 1 of the two-year renovation project has included the installation of a new artificial turf surface completely covering the football, baseball and softball portions of the field and a large new video scoreboard.  Because of the renovations all of the bleacher seating will now be on the south side of the field.

Both teams are looking to keep the momentum from victories last weekend, Medina/Lyndonville 26-15 over Tonawanda and Newfane 48-18 over Lew-Port.

“I’ve been very impressed with what I’ve seen of Newfane so far. They are very physical and very athletic across the board,” said Mustangs Coach Eric Valley. “We’ve got to play solid defense because they have shown they can score plenty of points. And offensively we’ve got to have a good balance between the run and the pass to keep them on their toes.”

Now at 2-0, the Mustangs are led offensively by quarterback Izaiah Rhim who has passed for 6 touchdowns and run for 2 more.  Brendan Luthart and Mason Lewis both have a pair of TD receptions while Jalin Cooper and DaRon Bellan each have 1.  William Braswell has led the Mustangs ground attack with 3 touchdowns.

The Panthers offense has been sparked by quarterback Brandon Gross who passed for 3 touchdowns and ran for 2 more against Lew-Port and Chad Dunbar who had 3 scores, 2 rushing and 1 receiving.

Albion will make the long trek to Brocton to face the tri school team of Fredonia/Westfield/Brocton in a B-2 Division game at 7 p.m. Friday.

The Purple Eagles are 2-0 after putting together a big four touchdown second half scoring burst to erase a 7-0 deficit and defeat host Depew 28-7.

Fredonia/Westfield/Brocton is 1-1 after losing to Olean 28-13 last week.

It will be Albion’s first meeting against Fredonia/Westfield/Brocton. However Albion has met and defeated Fredonia twice previously 21-7 in 2001 and 21-0 in 2002.

Quarterback Bryce Pritchard, who has thrown 2 touchdown passes, both to Nate Moore, and run for 1 score leads the Albion offense. Ugene Harrison has added 4 rushing touchdowns and Brilliance Johnson 2.

Roy-Hart/Barker will host Tonawanda at 7 p.m. Friday in a B-3 Division matchup of teams both looking to snap season opening two game losing streaks.  Roy-Hart/Barker lost 41-18 to Alden and Tonawanda 26-15 to Medina/Lyndonville last weekend.

Holley will likewise to looking to gain that first win of the young season as the 0-2 Hawks visit 2-0 Alexander at 7:30 p.m. Friday in a Livingston County League game.  The Trojans blanked Pembroke 34-0 last weekend while the Hawks dropped a 35-0 decision to Attica.

Alexander holds an 11-3 lead in the series with Holley.