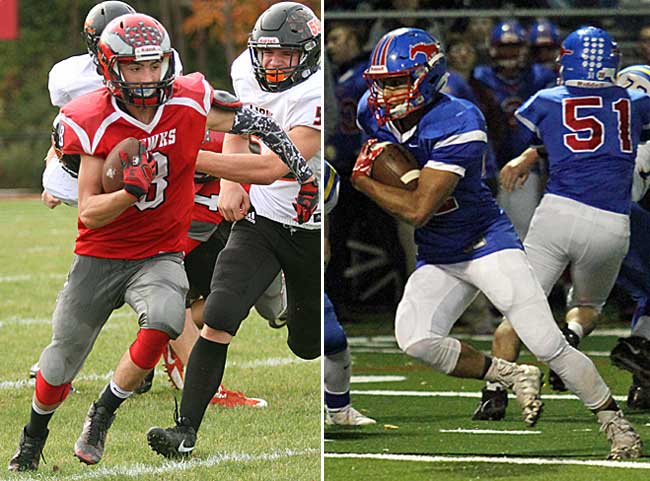 The local high school football season will conclude on Thursday evening as Medina/Lyndonville and Holley both take to the road to compete in Bowl title games.

Medina/Lyndonville will face Olean in the Class B Chuck Funke Memorial Classic at Pioneer High at 7:45 p.m.

Holley will take on a very familiar foe in Attica for the Section V Class C-1 Connors and Ferris Bowl title at 5:30 p.m. at Attica.

Medina/Lyndonville advanced to the finals by trimming Alden 24-21 while Olean downed Burgard 36-24.

“We’re a little banged up right now,” said Mustangs Coach Eric Valley whose injuries include wide receiver Jalin Cooper who is out with a knee injury and quarterback Izaiah Rhim who is nursing a sore knee.

Rhim has led the Mustangs attack with 13 touchdown passes and 7 rushing TDs.

“We’ve had our ups and downs this season but we’re looking to finish strong,” added Valley.

The meeting will be just the third between the Mustangs and Huskies. The previous two also came in the consolation bowl.  The Mustangs scored a 26-7 win in 2006 while the Huskies claimed a narrow 15-14 victory in 2009.

Medina/Lyndonville is 5-3 and Olean 4-4 heading into the final.

The Mustangs previously captured the B Bowl title in 2012 downing East High of Buffalo 38-24.

Holley earned a spot in the title contest by romping past Wellsville 37-0 while Attica blanked Wayland-Cohocton 23-0 in the other semifinal.

The Hawks special teams came up huge in that one accounting for three touchdowns on punt returns of 65 and 55 yards by Camron Labarge and an 80 yard kickoff return by Jacob Affronti as well as adding a 34 yard field goal by Ryan Andrews. Labarge now has a total of 10 touchdowns on the season and Affronti 7.

It marks the third time in the last four years that Holley has advanced to the Bowl finals.
The Hawks defeated Mynderse 34-6 in the 2015 title contest but lost to that same team 32-12 in the 2014 final.

Attica, which bested Holley 35-0 in the season opener, holds a 16-0 record in the all-time series with the Hawks. Both teams are 4-4 on the season.