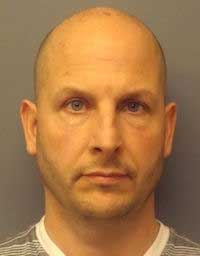 That means Adam Mesiti will be publicly registered as a sex offender, and must notify law enforcement of any changes in his address and provide recent photos every three years for the database that is available online.

Mesiti, a retired sergeant with the Brockport Police Department, took a part-time job in retirement as a security officer with C.O.P. Security, working at Holley Central School. While working that job he had sex with a Holley student in 2014, beginning when she was 16.

District Attorney Joe Cardone said in court today there were multiple incidents of sexual activity with Mesiti and the girl, and they occurred at his office in the Holley school.

A level 3 offender has more than 110 points and is in the public registry and will never be removed while the offender is alive.

Kennedy argued the last 20 shouldn’t have counted because Mesiti wasn’t in a professional role. District Attorney Joe Cardone and County Court Judge Sara Sheldon said Mesiti clearly used his role as a security officer to gain access and trust of the victim.

Kennedy also said the initial sexual contact with the girl happened when she was 16. She then turned 17 as the relationship continued. He said the 20 points for a victim aged 11 to 16 shouldn’t count for Mesiti. Cardone said the victim gave grand jury testimony that the sexual relationship happened several times while she was 16.

The DA said Mesiti’s point total should be higher than 85. An offender should get 10 points for not accepting responsibility for the crime, which Cardone said is the case with Mesiti.

“He has the support of the community, from his family, friends and neighbors,” Kennedy said. “This was an isolated event.”

The judge and DA both opposed the level 1 ranking.

One of Mesiti’s supporters shouted in court that Cardone was corrupt and had coerced a guilty plea out of Mesiti.

“I think you better not say that in court, mam,” Judge Sheldon told the Mesiti supporter.

Mesiti on May 22 pleaded guilty to third-degree rape. He was sentenced to 10 years probation on Aug. 28. His guilty plea included the possibility of six months in jail, but Judge Sheldon decided against any jail time.

“I’m not going to take away his livelihood,” she said.