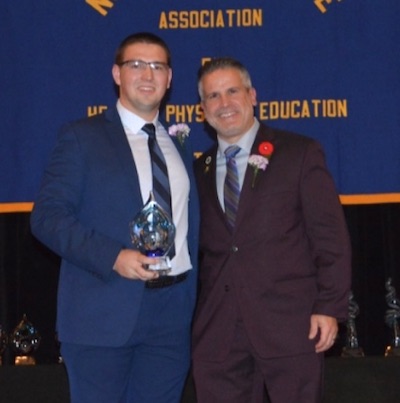 BROCKPORT – A Medina graduate who is working on his master’s degree in athletic administration at Brockport State College, has won a state award given to an outstanding student majoring in physical education.

Albone earned his bachelor’s degree in P.E. at Brockport, double majoring in physical education and health education, with a  concentration in adapted physical education. He is working on his master’s and plans to work as a P.E. teacher in a school district.

“It’s what I have a passion for and what I want to do with my life,” he said about being a teacher and coach.

He has been active locally at the Orleans County YMCA the past 4 ½ years, working as youth sports program director and the canal club coordinator. He also coached youth soccer in medina and assisted a lacrosse team at Brockport High School.

That organization, AHPERD, selected Albone as the recipient of Jay B. Nash Outstanding Major Award. It is given to two undergraduate students for their outstanding performance and extensive preparation for the profession in the areas of health education, physical education, exercise science, recreation or dance education.

This award is the most prestigous award that a student can receive at the state level from the NYS AHPERD.

Albone is a 2021 graduate of SUNY Brockport. During his time at Brockport, he found success in holding leadership positions at the state level, as well as at the collegiate level. He was a part of numerous community involvement, teaching, and coaching experiences, along with striving in the classroom.

With receiving the Jay B. Nash Outstanding Major Award, Albone was put into two pools for two different national awards through The Society of Health and Physical Educators (SHAPE America). Albone was selected this spring for the Ruth Abernathy Presidential Award as well as the Robert Pate Teaching Award.

Robert M. Pate Student Award sponsored by the SHAPE America, the Robert M. Pate Student Scholarship is given annually to undergraduate student currently pursuing a degree in Health Education or Physical Education. Recipients must be an outstanding undergraduate student who exemplifies professionalism, academic achievement, service and character. Selections are based on academic achievement, community service, professionalism and character.