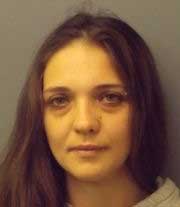 MEDINA – A Medina woman has been charged with criminal sale and criminal possession of controlled substance in the third degree (Class B felonies) for allegedly selling hydrocodone in western Orleans County, the Major Felony Crime Task Force said today.

The Task Force and Medina Police Department worked together in investigation. The arrested Jenia Suarez-Jimenez, 25, of 11105 Telegraph Rd.

She was arraigned in Yates Town Court by Town Justice Donald Grabowski. Suarez-Jimenez was committed to the Orleans County Jail on $20,000 bail. She is due back in court on April 10.