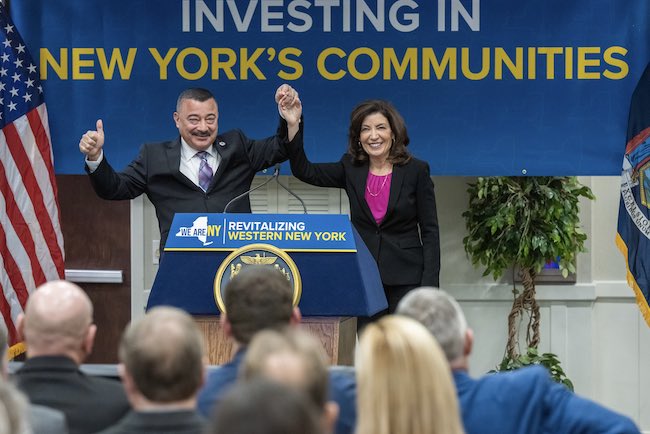 Photo by Darren McGee/Office of Governor Kathy Hochul: Dunkirk Mayor Willie Rosas is congratulated by Gov. Hochul in Dunkirk on Monday when the small city in Chautauqua County was named a $10 million winner of a Downtown Revitalization Initiative for the Western New York Region.

MEDINA – Village officials have their fingers crossed and are very hopeful the Village of Medina will soon be announced as a winner of either a $4.5 million Forward New York grant or a $10 million Downtown Revitalization Initiative.

Gov. Kathy Hochul has been announcing the awards in other regions of the state. Medina applied for the funding through the nine-county Finger Lakes Region. Medina has been a finalist before but hasn’t been awarded any of the millions.

This time the state expanded the program. It continues to offer the $10 million DRI to ten regions in the state. Those grants are more focused to cities. The Forward NY grants are a new program targeted to villages. Hochul said the big grants from the state are “catalysts” for private investment in the communities. The grants can jump-start projects and help finish off other efforts.

Mayor Mike Sidari of Medina said the village has applied and been interviewed by officials in the region and state for both the $10 million DRI and $4.5 million Forward NY. The funding with accelerate economic development, small business development, tourism and housing projects.

The village has identified potential projects. If awarded one of the grants, those projects would need to go through a final approval process with the state with more precise construction estimates.

Hochul, during a stop in Dunkirk on Monday, said the DRI program has proven to be successful and she believes the Forward NY will make a big difference for villages as well, creating more housing and business opportunities, while capitalizing on resources such as the Lake Erie waterfront in Dunkirk.

For too long the state has seen an exodus of young adults to other states, Hochul said.

“We exported – our greatest export was our human capital,” she said in Dunkirk. “We sent our smart young people to other states and other communities and let them build up. But I am so proud to have lived long enough to see a complete reversal where people want to live here. They understand the quality of life we have in especially our smaller cities, our little hamlets, our villages, and you can’t put a price tag on the quality of life of raising a family in these areas.”

The DRI and Forward NY are intended to build off existing strengths, to build on momentum in villages and cities already experiencing success.

Mayor Sidari said Medina officials presented an application showing a community on the upswing with a dynamic downtown, an engaged citizenry, and several businesses that have made big investments and expansions.

“We brought a great application to the committee and our interview went very well,” Sidari said this morning. “Hopefully the fifth time is the charm.”

On Monday, Hochul announced the Western New York region winners: $10 million DRI for the City of Dunkrik, and $4.5 million Forward NY for both Lancaster and Wellsville.

In the North Country, Hochul on Monday announced the $10 million DRI for the Town of Ticonderoga, and Forward NY grants of $4.5 million for the Village of Cape Vincent, and $2.25 million for both the villages of Lyons Falls and Waddington.