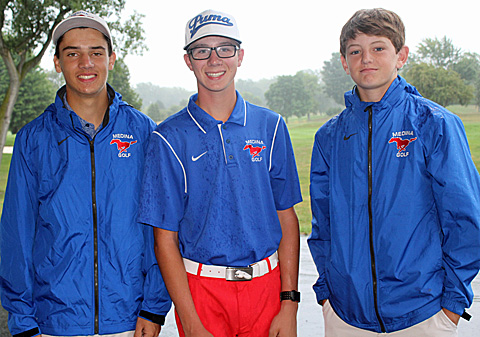 Photo by Mike Wertman – Helping to anchor the lineup for the Medina High golf team this season are returning starters Mike Cardone, Ian Wagner and Trevor Luthart. Missing from the photo is Andrew Fuller.

After finishing in the runner-up spot the last two years, Medina is again looking to challenge for top Niagara-Orleans League golf honors this season led by a quartet of returning starters.

“The big key for us is they all have to play consistent,” said Coach PJ Bell whose Mustangs have gone 12-2 each of the last two seasons and both times have finished second to undefeated (14-0) Wilson.

Medina is slated to visit Akron in the N-O opener on Thursday.

In addition, Melanie Green, a freshman who was a starter last year, is playing a girls schedule this season in order to be eligible to compete in the girls Section VI and state tournaments. An N-O All-League honoree last year, she will be following the Williamsville East girls’ team schedule.

“It’s a great opportunity for her and with her skill and ability she should do very well,” said Bell.