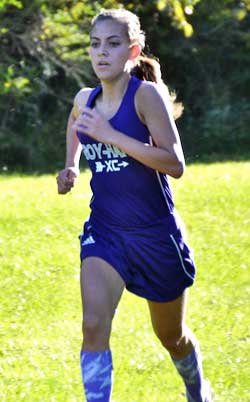 Medina trimmed host Akron 27-30 this afternoon in a Niagara-Orleans League boys cross-country meet as the Mustangs improve to 2-1.

The Mustangs were led by the 1-2-4 finish of Dan Heil, Aldan Cayea and Jack Hill as Zach Sanford’s third place finish was tops for the 1-1 Tigers.

Akron won the girls meet 22-40 behind the 1-2 finish of Margo Henley and Maddie Jimerson.

Improving to 3-1, the Purple Eagles were paced by the 2-3-4 finish of Alanna Holman, Emma Mathes and Hannah Grammer.

Wilson’s Will Schwarzmüller won the race as the Lakemen also got a 3-4-5 finish from the trio of Nathaniel Johnson, Cal Seeley and Quinn Rees.

Sam Auernhamer and Collin McCabe finished 1-2 for the 3-0 Newfane boys as Barker’s Peter DiLorenzo was third.

Staying perfect at 3-0, the Newfane girls were sparked by the 1-2-3 finish of Kim Goerss, Vanessa Burkard and Lydia Chunco.