BATAVIA – Throughout a civilian and military career that includes nearly two decades outside of the United States, Luke Granger said he has made it his “mission” to help others. 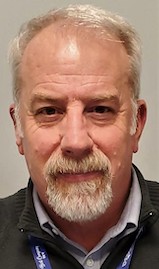 “Whether I’ve been working in full-time ministry, teaching in the military or working in IT (information technology), I’ve always tried to focus on people,” said Granger, who was hired last month as Director of Recovery Services at Genesee/Orleans Council on Alcoholism and Substance Abuse.

Granger, 58, is back in Western New York after spending 11 years as a senior IT director for a Dallas, Texas company. He and his wife, Teri, are residing in Mount Morris.

The Wellsville native and Army veteran calls his latest assignment, which includes supervision of around 30 GCASA recovery staff members, “one of the most important things I’ve ever done.”

“I’m honored and privileged to be in this position, and am excited for the opportunity,” said Granger, who has been in leadership roles for most of his adult life.

Granger earned bachelor’s and master’s degrees in Theology from Jacksonville Baptist Theological Seminary and went on to full-time ministry in the Southern Baptist denomination.

From there, his travels took him to Costa Rica and Honduras, conducting mission trips for three years.

He then was the pastor of a church in Coleman, Fla., for about six years prior to taking a position as Director of Religious Education for the Department of Defense, both in Germany and then in Fort Drum (N.Y), from 2007-2010.

“It has been very rewarding. I’ve had a great life,” he said, adding that he also spent some time in Russia and Ukraine for pastoral training.

Granger’s responsibilities at GCASA include overseeing programs involving peer recovery advocates, transportation, re-entry (after incarceration), and The Recovery Station on Clinton Street Road, along with working with management of the treatment, residential and prevention departments.

When not on the clock, Granger said he makes time to craft items out of wood and likes to travel with his wife.