Longtime medical examiner talks to students about dangers of addiction, and what can be a difficult profession 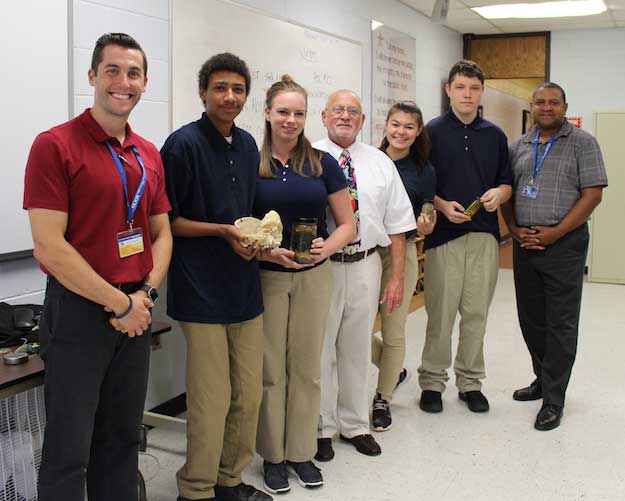 Mr. Hodgson talked to the students about his former career and showed the students an autopsy video and some photos from cases that he worked on. He talked to then about cases that made an impact on him and what they may encounter as law enforcement when attending accidents or crime scenes.

Mr. Hodgson has been lecturing to students from elementary schools to colleges for over 50 years. He is known for being frank on his experiences and brings up subjects like opiate addiction and what he believes will be a rise in suicide in young adults who won’t be able to hide their addiction once they graduate from school.

“I have been preaching about this epidemic for years and no one would believe me and now it is happening everywhere from inner cities to affluent neighborhoods.”

Chloe Pilc, a student who attended the lecture, says she found the autopsies interesting as well as Mr. Hodgson’s observations and reactions.

“He showed a photo of a little girl that was beaten to death and he got very emotional. I want to be a police officer and you have to think about that; you will see sad things like that.”

Classmate Tyshen Finn says he wants to go into the military. It would be hard to deal with dead bodies. “There was a crazy amount of information that he showed us. Some of it was very graphic.”

Armanie Abrahams, a student, said he was shocked when Mr. Hodgson said that in their combined classes that one out of eight would become addicted. “I started counting around the class and how many people that would be, that is a lot of kids.”

Darien Monaghan says he thought Mr. Hodgson was very down to earth.  “I had a chance to talk to him and he told me no cop wants to be the one to go to the morgue. I really don’t think that would bother me if I had to. I found it interesting what is inside a human body and in some ways my imagination was worse than what actually does happen.”