Three  players who helped Medina capture the Section VI Class C title, have been named to the Class C All State football squad. 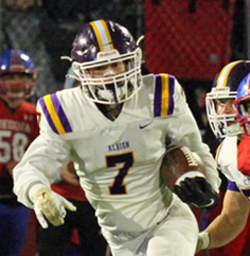 Senior quarterback Xander Payne and junior running back Noah Skinner have both been named to the third team while senior defensive back Greg Thompson received Honorable Mention.

Payne passed for 1,636 yards and a school record 22 touchdowns this past season. He also rushed for 417 yards and 7 touchdowns.

Skinner rushed for 740 yards and 11 touchdowns. On defense, he made 73 tackles and had 6 sacks and 2 fumble recoveries.

Thompson had 5 interceptions and 28 tackles. On offense he caught 24 passes for 494 yards and 6 touchdowns and rushed for 559 yards and 5 TDs.

Albion senior defensive end Jahmeek Riley was named to the Class B All State fifth team. He made 48 tackles and had 3 sacks. On offense he caught 13 passes for 238 yards and 2 touchdowns and also rushed for 2 TDs.