Legion Post donates $500 for Wreaths Across America in Medina 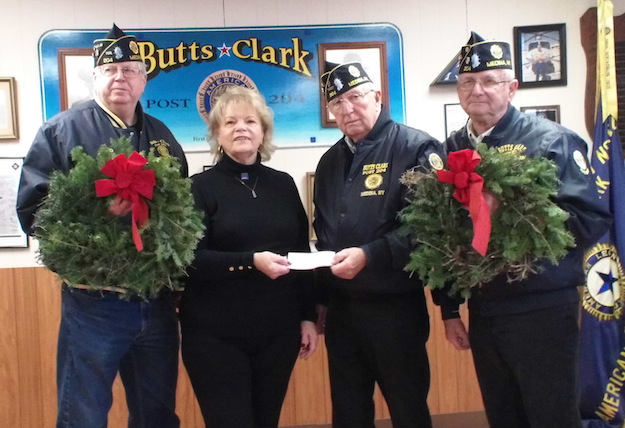 Photo by Ginny Kropf: The Butts-Clark American Legion Post made a $500 donation to the local Wreath’s Across America project on Friday afternoon. From left are Dave Kusmierczak, Wreaths Across America coordinator Kathy Blackburn, Legion commander Glenn Whitmore and Dave Morien.

MEDINA – Medina’s Wreaths Across America project got a big boost Friday with a $500 donation from the Butts-Clark American Post.

The donation is particularly significant because the national Wreaths Across America organization announced it would match any donations made by Jan. 13, said local organizer Kathy Blackburn.

“I’m thrilled people are stepping up for this match program,” Blackburn said.

Medina first participated in Wreaths Across America in 2013, when the initial seven free wreaths were sent from the Worcester, Maine, Morrill Wreath Company. Support for the program soon mushroomed, with 315 wreaths placed in Boxwood Cemetery last month.

Blackburn also praised Tom Snyder from Medina Lumber, who made a major donation to the effort.

Next year, Blackburn said all veterans’ graves in St. Mary’s and Sacred Heart Cemetery will also have wreaths placed on them.

Dave Kusimerczak, a member of the local American Legion, who first suggested the Post make a donation to Wreaths Across America, has volunteered to walk both St. Mary’s and Sacred Heart Cemetery and count the number of veterans’ graves.

Blackburn said it is incredible how the Wreaths Across America program has spread across the country. Initially, in 1992, Morrill Worcester of Harrington, Maine, who owns a wreath company, had a surplus and donated enough to cover a neglected section of Arlington National Cemetery. Now, annually hundreds of tractor trailer drivers donate their services to deliver wreaths to 2,700 locations across the county.

“This program is amazing,” Blackburn said.

She added they can always use more volunteers to help placing the wreaths, the third Saturday in December each year.

Kusmierczak said he suggested the donation because he not only wanted to honor veterans, but give recognition to the American Legion.

Legion Commander Glenn Whitmore said he thought it was a great thing to do.

Anyone who would still like to make a donation and have it doubled by Wreaths Across America, can get it to Medina village clerk by Jan. 13. Checks should indicate “Wreath program.”