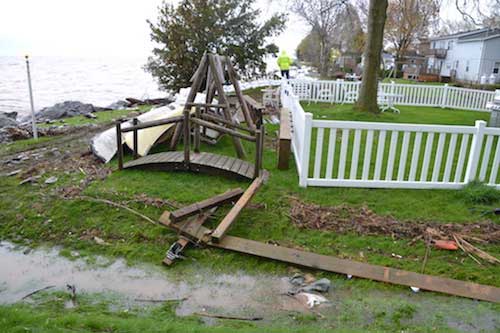 File photo by Tom Rivers: These backyards in Kendall were flooded from the high Lake Ontario in early May. Many residents have lost chunks of their backyards due to erosion, with the lake getting closer to their houses.

KENDALL – A new group – United Shoreline – has formed to send a strong message on behalf of the thousands of residents and property owners along the southern shore of Lake Ontario.

United Shoreline will have its first public event on Friday at 7 p.m. at 16031 Lomond Shore West in Kendall.

“We need to unite and get a louder voice,” said Dawn Herbeck, one of the organizers of the group. “This is effecting all of us. It’s encroaching our homes right now.”

United Shoreline is reaching out to Orleans County residents, property owners, government officials and other stakeholders who want to find solutions for the high lake levels that have been eroding land, threatening homes and businesses.

Herbeck would like to see the organization spread to include Niagara, Monroe and other communities along the lake.

She sees strength in numbers with the organization pressing for answers and solutions to high waters.

There is a sense of urgency because many residents, including Herbeck, have lost big chunks of land due to the erosion.

Herbeck is a resident of Kendall along the lake since 2014. Many of her neighbors have homes along the lake that have been in their families for generations.

They have lost docks, stairs and lots of land to the lake in the past two months. It’s not uncommon to see trees floating by, Herbeck said.

The group wants to form committees to be tasked with working on issues for the lakeshore property owners.

Friday’s meeting on the street at Lomond Shore West will help the group measure the interest in United Shoreline.

“It’s not a complaint session,” Herbeck said. “We need to move forward.”

For more information, contact the group by email at unitedshore2017@gmail.com.