Belgian Malinois served in Medina PD for 8 1/2 years; meets with residents in farewell 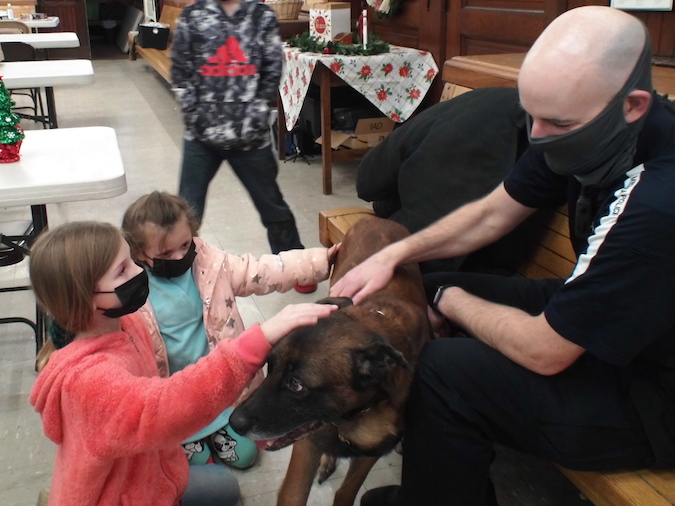 Photos by Ginny Kropf: These children –Chloe Moreland, 9, (left) and Kinsley, 5 – pet Kye at the Medina Senior Center today, where Lt. Todd Draper took the dog so residents could say goodbye to him.

MEDINA – Kye, the Village of Medina Police Department’s K-9 until retiring in November 2020, bid goodbye to handful of residents, Medina police officers and firefighters this afternoon.

Kye’s handler, Lt. Todd Draper, brought the Belgian Malinois to the Senior Center this afternoon, so residents and children could come and say goodbye to the dog, who has been diagnosed with bone cancer. 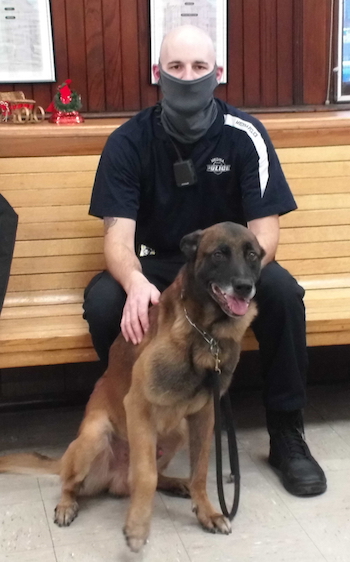 Lt. Todd Draper waits with Kye to meet the public this afternoon.

Draper knew many children had interacted with Kye at school and public events during his 8 ½ years on the police force, and he wanted to give them a chance to say a final farewell.

When the village decided to have a K-9 on the police force, Draper was named K-9 officer and Kye was imported from Holland when he was a year old. That was in 2012. He had some basic training in Holland, and for a year after arriving in Medina he continued to train in narcotics detection, building searches, criminal apprehension and handler protection.

He served the village well until being retired at the age of 10 1/2. That was little more than a year ago and the village now has a new dog of the same breed, Phoenix. His handler is Officer Jake Reeves.

The first visitors to come and greet Kye on Tuesday were Ashley Moreland of Medina and her children Jaden, 10, Chloe, 9 and Kinsley, 5.

“The children had seen Kye in school and wanted to come and say goodbye,” their mother said.

Draper set up a display with pictures of Kye during his years on the police force, newspaper clippings of arrests he had a part in and posters drawn by children. Many had messages which said, “We will miss you.”

Kye has become part of the Draper family. About 2 1/2 months ago, the lieutenant said they noticed Kye was having difficulty moving. They knew he has undergone a lot of sprains and strains during his police work, but when he got worse, they gave him some medicine. It didn’t help, so they took him to the vet, who also gave him medication, then ordered some tests.

It was confirmed Kye had  bone cancer on his right shoulder. Already the tumor is the size of two grapefruit.

Draper said Kye isn’t in any pain, but he knows the day will soon come when the decision will have to be made to put him down.