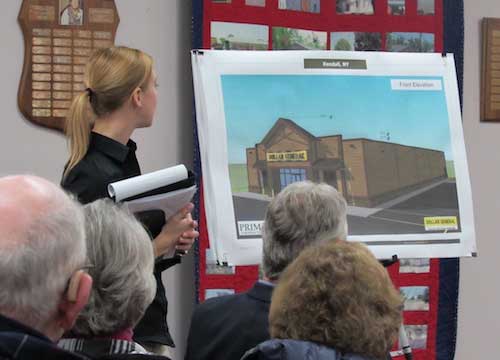 Photo by Kristina Gabalski: Caryn Mlodzianowski of Bohler Engineering reviews plans during a public hearing Tuesday evening for the Dollar General project in Kendall. The proposed retail store is 9,100 square feet and includes 36 parking spaces.  Mlodzianowski said the project meets setback requirements of the town, includes green space and will connect to public water.  The store will have a private septic system.

KENDALL – Members of the Kendall Planning Board recessed their March meeting on Tuesday evening, putting further site plan review and subdivision approval for the proposed Dollar General store off until April 5.

Planning Board Chairman Andrew Kludt decided to table the decision and recess the meeting to allow for detailed conditions to be spelled out before the necessary subdivision is approved.

Members of the Orleans County Planning Board on March 23 recommended Kendall approve the project with two conditions: that the signage be in compliance with zoning, and that the area of the parking lot where there will be truck traffic must have a darker, more heavy duty pavement.

The Dollar General is proposed on 1.4 acres of land on Rt. 18 (Roosevelt Highway) just west of the Kendall Rd., (Rt. 237) intersection.  The location is now a vacant field in the General Business zoning district of the town.

In addition to the conditions of the County Planning Board, the Kendall Planning Board’s list of conditions includes evergreens planted on the west side of the property along a six-foot high fence, septic approval by the Department of Health, a six-foot high fence on the east side of the property not to interfere with a drainage ditch, and an eventual tie-in with sidewalk, once the town is able to install sidewalk to the Dollar General property line.

Several residents and town officials attended the meeting, which included a public hearing on the requested subdivision.

No one spoke out against the project. One resident asked if the interior of the store would be similar to other Dollar Generals in the area.

“If you look at any of the stores built over the last five years, the inside will be virtually identical,” said R.H. “Rob” Neill, Jr., project director from Primax Properties.

Planning Board Chairman Andrew Kludt said he has visited a new Dollar General store on Rt. 63 near Rt. 104 in Ridgeway and was very impressed.

Caryn Mlodzianowski of Bohler Engineering said there will be service doors on the store where the trucks will pull up for deliveries.

Neill said deliveries are always made during regular store hours which tend to run from 9 a.m. to 9 p.m.

The exterior of the proposed Dollar General in Kendall includes lap siding in brown, a peak roof on the facade over the entryway and shutters and awnings for the windows.

“We’ve come a long way,” Mlodzianowski noted, “before it was all flat lines and metal siding. We are excited to continue the review here and are hopeful we can move forward.”

“I’m very pleased,” Councilperson Barb Flow said. She described the exterior as “rustic and rural,” exactly what the town wants. “I am very happy to see what you have done to the front of the store.”

The Planning Board will meet at 7 p.m. at the Kendall Town Hall on April 5.  Chair Andrew Kludt said he expects to approve the environmental review for the project as well as the subdivision at that time.