Sharon Davis had first of string of DWIs in Barre, with BAC of .26% 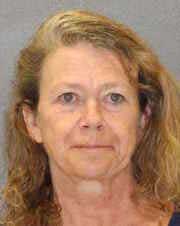 ALBION – A Livingston County woman was arraigned in Orleans County Court this afternoon for the first of her four driving while intoxicated arrests – all in the past three months.

Sharon Davis, 54, of Geneseo was arrested on April 21 in Barre and registered a 0.26 percent Blood Alcohol Content.

She was arrested for DWI in Batavia on May 15, and then on June 24 in Geneseo, and a day later in Lakeville, Livingston County.

The judges set bail at $5,000 each in Batavia, and the two courts in Livingston County.

“I’m very concerned about the set of circumstances,” Punch said in setting bail for Davis.

She appeared in court today wearing the inmate-issued clothing from the Livingston County Jail.

District Attorney Joe Cardone said Davis has a prior DWI felony in Monroe County in 2008.

Davis’s attorney, Kevin McKain, said she doesn’t have a prior criminal history outside of the “drinking-related offenses.”

She is due back in Orleans County Court on July 26 for a conference.