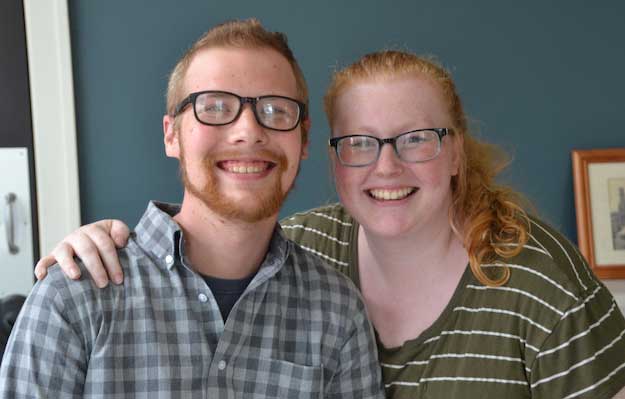 Photo by Tom Rivers: John Torsell-Isaascon is halfway through his chemo treatment for stage 4 Hodgkin lymphoma. He is pictured with his girlfriend of five years, Amanda Blackburn. The chemo has shrunk the cancer and the Torsell-Isaacson is optimistic for a full recovery.

MEDINA – John Torsell-Isaascon, 24, is thankful for a big support system that has rallied around him while he fights stage 4 Hodgkin lymphoma.

Torsell-Isaascon of Lyndonville was diagnosed with the cancer in early April and started chemotherapy on April 29. He has completed six of the 12 treatments, and gained 30 pounds.

Torsell-Isaascon’s weight had plunged before his diagnosis. The cancer was absorbing the nutrients.

Now that the cancer has shrunk significantly, Torsell-Isaascon has been able to regain the lost pounds. He is up to 160.

Many of friends and family are planning a big fundraiser next Saturday, July 20, for Torsell-Isaascon at Leonard Oakes Estate Winery on Ridge Road. The “Jam4John” from 4 to 9 p.m. includes music, food, prizes and many baskets up for auction.

“It’s really humbling,” Torsell-Isaascon said Friday at the Shirt Factory Café, where he joined his girlfriend Amanda Blackburn for lunch. “I’ve learned to accept help. I’m so grateful. I can’t begin to express my gratitude.”

The Oakes family is hosting the benefit for Torsell-Isaascon. He has worked for the family the past three years in the apple packing line at LynOaken Farms and also a truck driver, delivering apples to grocery stores in New York State.

Torsell-Isaascon had a lump under his right arm that prompted him to go to the doctor. He was diagnosed with the advanced Hodgkin lymphoma, which is curable with chemotherapy.

His girlfriend Amanda Blackburn is in her last year at Niagara University, pursuing a degree in nursing. She has been key in helping to understand the cancer and tackle the treatments at Roswell Park Comprehensive Cancer Center in Buffalo. Torsell-Isaascon goes every two weeks for chemo.

The two met about five years after a soccer game at Lyndonville. John was waiting to pick up a sibling. Amanda was coming from volleyball practice. They started talking and became friends.

Torsell-Isaascon comes from a big family with 12 siblings. His is the second oldest.

His mother, Deborah Isaacson, has been working on the benfit, with lots of help from Gretchen Albone, Christie Mombrea and Mandee Heinsler. Wendy Oakes Wilson from LynOaken has also been supportive in the Jam4John, where Torsell-Isaascon hopes to join the musical performers.

Tickets to the Jam4John provide admission to music and food, as well as a chance to win a 50-inch Smart TV. There are many items at the basket auction, included signed merchandise from Buffalo Sabres and Bills players.