Photo courtesy of Governor’s Office: Gov. Andrew Cuomo speaks in Syracuse on Wednesday. He touted his plan to make local governments come together and come up with a shared services plan to reduce taxes.

The new state budget, passed over the weekend, will make local government leaders across the state meet in each of their counties and work together on a shared services plan to reduce the cost of local government.

He wants to see the local governments share more resources, and even consolidate to reduce the layers.

Cuomo’s claims have been refuted by associations representing villages, towns and counties. They say the state has many unfunded programs, such as Medicaid, that drive up local costs. Orleans County taxpayers pay about $8 million annually towards Medicaid, about half of the county’s tax levy. Indigent defense, another state mandated program, cost Orleans about $500,000 a year.

Nesbitt said the county has been a recognized leader in shared services, including a partnership with Genesee County in public health. The two counties have a merged Board of Health and share the same director and other staff.

The county and local towns and villages share manpower and equipment for paving and other road projects, a relationship that has been going on for decades.

Nesbitt and the local officials submitted a shared services plan to the state in 2015 that showed $3 million in savings annually. (See more on those savings near end of the article.)

Cuomo and the State legislature have empowered the top-ranking county official in each county to bring together all of the local governments and develop shared services plans.

Nesbitt said it’s unclear in counties like Orleans, without a county executive, who would lead the shared services plan. Would it be Nesbitt as chief administrative officer of the county or the chairman of the seven-member County Legislature, currently David Callard of Ridgeway? The county is seeking a legal opinion on the issue.

Cuomo said the local governments can learn from the state in paring costs and sharing services.

“I think people will engage,” Cuomo said about the shared service meetings. “I think they’re very concerned about property taxes. They get it. Upstate New York has the highest property taxes in the United States of America. You bring the power of democracy to this discussion and you’ll see how local governments can actually find ways to save money and get creative, and I’m very excited about that because that can make a dramatic, dramatic difference.”

Orleans County is currently working on a law enforcement study, looking for efficiencies in providing police service in the county among the Sheriff’s Office, and police departments at Albion, Medina, Holley and Lyndonville. Nesbitt isn’t sure if the state shared service push will effect the law enforcement study, if it will continue as a separate effort or if it will be folded into a bigger discussion. 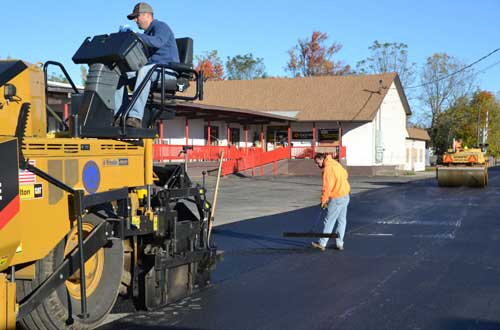 Bryan Hazel, an employee with the Orleans County Highway Department, operates the paver on Hamilton Street in Albion on Oct. 26, 2015 while Tim Banker of the Village of Albion DPW works behind the big machine. The county shares the paver and some of its personnel for paving projects around the county with towns and villages.

The governor and State Legislature would be more effective in cutting property taxes by relieving local governments of paying for many state-mandated programs, Nesbitt said.

“This is more about the governor running for president than finding practical solutions for New York State,” Nesbitt said. “It’s a burning dumpster fire of a proposal. It’s a condescending and insulting proposal.”

The New York Conference of Mayors said the governor’s focus on reducing taxes is misdirected at the local level.

“Municipal government is and will continue to be the shining example of efficient government in New York.,” said NYCOM Executive Director Peter A. Baynes.

Here are some highlights from the “Local Government Tax Efficiency Plan” in 2015 in Orleans County:

In Orleans, the four villages, 10 towns and county government that took in about $27 million in taxes in 2014. The state told the municipalities in each county to identify at least 1 percent in savings for the total tax levies. For Orleans County, that 1 percent represented $273,001.

“This is what we must do to survive,” David Callard, chairman of the Orleans County Legislature, said in June 2015 when the plan was complete. “We’re really doing some consequential things.”

Some existing efficiencies at the county level include:

• The partnership with Genesee County, where the two counties share a public health director and three other staff, as well as a joint contract for busing disabled preschool children, has saved Orleans about $328,275 annually.

• Orleans has also reduced 22 staff positions from Jan. 1, 2012 to Dec. 31, 2014, which has a annual savings of $1,020,058. This reduction does not count the 100-plus workers at the former county nursing home. That site became privately owned in January 2015. Selling the county nursing home and moving those employees from the public to private payroll saved taxpayers $1.5 million a year, according to the county’s efficiency plan.

At the town and village level, savings noted in the report include:

• The Village of Albion counts $36,000 in savings through shared paving services with local towns and the county, and $63,000 by running Holley’s sewer plant.

• Carlton included $1,300 in savings through new energy efficient lighting at the town buildings.

• The Village of Holley says it saves $40,000 a year through a contract with Albion, having Albion personnel paid to run Holley’s sewer plant rather than Holley staff or an outside company.

• Kendall counts $20,000 in savings through a consolidation of fire districts. Kendall also said it saved $31,200 by sharing an assessor with Carlton, $20,000 by working to establish a health insurance consortium, and $1,000 through more efficient utilities.

• Yates put down $500 in savings through energy efficient lighting at the town hall and highway garage.

Orleans and the local governments have proven they are willing to share resources and cut costs, Nesbitt said.