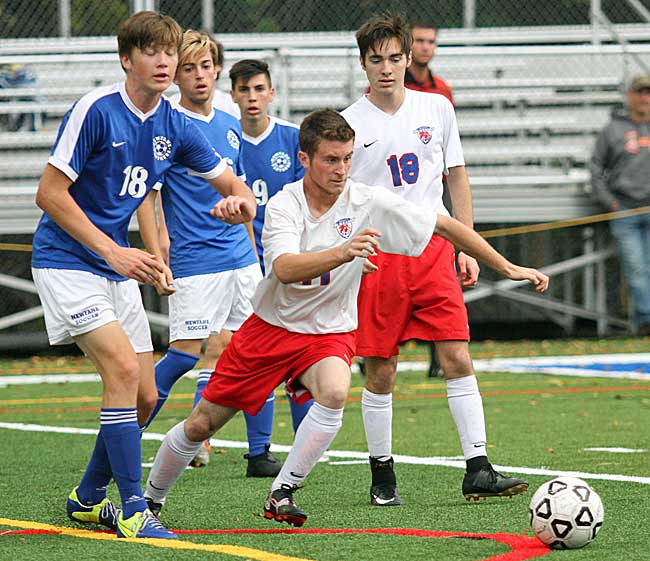 Photo by Cheryl Wertman – Norm McDonald goes for the ball for Medina/Lyndonville against Newfane defender Jarrett Gilson during the Mustangs loss to the Panthers this afternoon at Vets Park. Also shown are the Mustangs Andrew Houseman and the Panthers Matt Ditullio.

Roaring out to a 4-0 half-time advantage defending champion Newfane went on to defeat Medina/Lyndonville  8-0 at Vets Park this afternoon improve to 8-1 in Niagara-Orleans League boys soccer competition.

The victory, combined with runner-up Roy-Hart’s 6-3 loss at Albion, locks up a second straight N-O title for the Panthers.

Three goals by Mateo May and one by Trevor Moreland gave the Panthers the big half-time lead. Moreland then completed his hat-trick with two more goals in the second half as Trevor Heschke and Matt Ditullio each netted one.  May and Jarrett Gilson both had a pair of assists.

Medina/Lyndonville is now 2-6 in N-O action.

Kendyll Hadick scored three goals, Nate Scanlan two and Noah Goudreau one for Albion which held a 4-1 lead at the half. Hadick and Scanlan both scored twice in the first half.

Noah Kindron had two goals and Jamasen Johnson one for Roy-Hart which falls  two games behind front-running Newfane. The closest the Rams could get in the second half was at 5-3.

In the Genesee Region League, Holley nipped Wheatland-Chili 2-1 and Byron-Bergen/Elba blanked Kendall 2-0. Goals by Kayden Servais, off an assist from Dalton Major, and Matt Skehan, on a penalty kick, earned Holley the narrow victory.

Kayla Summers and Michela Hanlon both scored a pair of goals as Taylor ReQua, Madison Jacob, Abby Jenks and Adriana Passarell each netted one.

Hannah Ulmen and Katherine Pearson shared in earning the shutout in goal for Kendall which improves to 11-4.