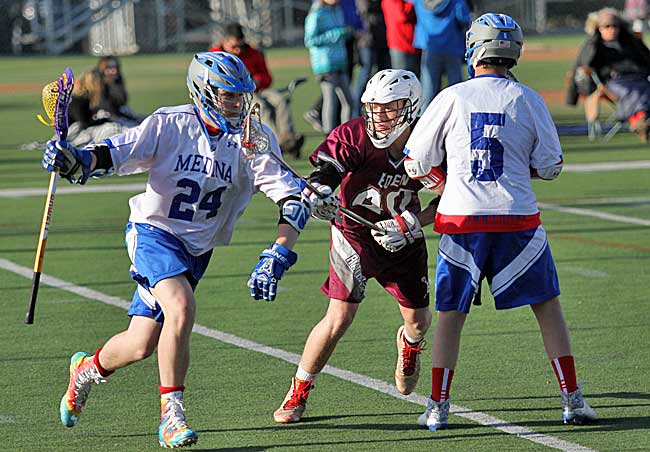 Photo by Cheryl Wertman – Medina’s Coby Albone (24) comes around a pick by Christian Silversmith (5) during the Mustangs loss to Eden this afternoon at Vets Park.

Building up mush as an 8 goal lead, Eden went on to defeat Medina 13-7 in a key early season Class D Division clash of unbeatens at Vets Park this afternoon.

The Mustangs  cut the deficit a bit to 10-4 at the three-quarter mark after a late burst of three straight goals, 2 by Brendan Luthart and 1 by Jake Cotter.

Medina then closed the gap to 4, 10-6, early in the final period after back-to-back goals by Mason Lewis and Luthart but the Mustangs could get no closer as the Raiders answered with 3 straight tallies to lock up the win.

Luthart finished with 3 goals and Cotter 2 as Lewis and Coby Albone both added 1. Cotter netted the Mustangs lone first half goal.