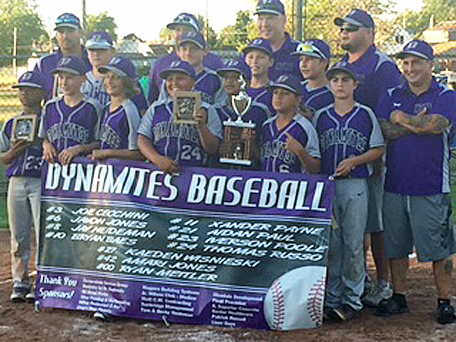 Contributed Photo – Players and coaches of the Dynamites squad which placed second in the season ending Lou Gehrig Tournament this past weekend.

In a tight contest decided in the final inning, the Dynamites were nipped 8-4 by the EMW Tribe of Elma in the championship game of the season ending Lou Gerhig Tournmanet in Amherst this past weekend.

The Dynamites opened the tourney by going 3 and 0 in pool play with wins over West Seneca Warriors, MMB out of Williamsville and The Titans out of Cheektowaga.

Seeded No. 2 for the weekend finals, the Dynamites took a 2-0 lead over EMW in the first inning as Joe Cecchini batted in 2 runs after Javon Jones and Thomas Russo added base hits.

The Dynamites defense then held the Tribe scoreless for 5 innings.

The Dynamites added one run in the bottom of the fifth with a solo home run by Iverson Poole over center field fence.

Trailing 3-0 going into the top of the sixth, The Tribe got their bats going and was able to put up 4 runs with a couple of hits, some key walks and a controversial call that did not go the Dynamites way.

Down by one in the bottom of the sixth. The Dynamites were able to tie the game with a solo home run by Cecchini

The Tribe added 4 runs in the top of the seventh which the Dynamites were not able to answer to end the game.

The Dynamite, which are based out of Roy-Hart, ended the season with an overall Record of 45 wins an 16 loses including championships in the Boys of Summer Kick off Classic, Darien Lake Ryne Sanburg Division, Erie Shootout , Lancer Tournament Diamond division and Boys of Summer Playoff Champions
.
The Dynamites will be holding tryouts for the next season 12U team on August 14 and 20 at 10 a.m. at 3511 Landers Ln, Gasport. All boys trying out must be 12 yearss or younger on May 1, 2017. The Dynamites will also be starting up a 9U team this year, Try outs will be on August 14 and 20 at 12 p.m. at 3511 Landers Ln, Gasport.