Deputy DeFilipps expected back to work in few weeks

ALBION – James DeFilipps, the Orleans County deputy who was shot twice on March 21, is recovering from his injuries and is expected to return to work “in probably a few more weeks,” said Chief Deputy Tom Drennan.

DeFilipps was wearing a bullet-proof vest when he was shot twice in the abdomen. That vest may have saved his life. DeFilipps still suffered deep bruises from the gun shots.

He has undergone a stress debriefing and remains in good spirits, Drennan said.

DeFilipps was working the east end of the county when he was in a shootout at about 3 a.m. on March 21 with James Ellis.

Ellis lived in Wyoming County. He allegedly pulled a handgun on an ex-girlfriend in Shelby. Ellis was then chased by law enforcement before crashing his vehicle into a telephone pole on Route 31A in Clarendon.

Police say Ellis open fired on responding officers, including DeFilipps. After DeFilipps was shot twice, he fired at Ellis, killing him.

Drennan said evidence from the incident will be presented to a grand jury soon and he expects DeFilipps will be found 100 percent justified in the shooting. 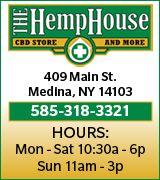