ALBION – The Orleans County Legislature has approved the 2022 sales tax apportionment with the 10 towns and four villages in Orleans County.

If a town’s tax base grows at a greater percentage than the village within that town’s borders, the town gets more of the sales tax and vice versa. The four towns without a village – Barre, Carlton, Clarendon and Kendall – stay unchanged for a decade because the sales tax apportionment once every 10 years is set based on population. For towns with villages the shares are then modified each year after based on changes in the tax base. 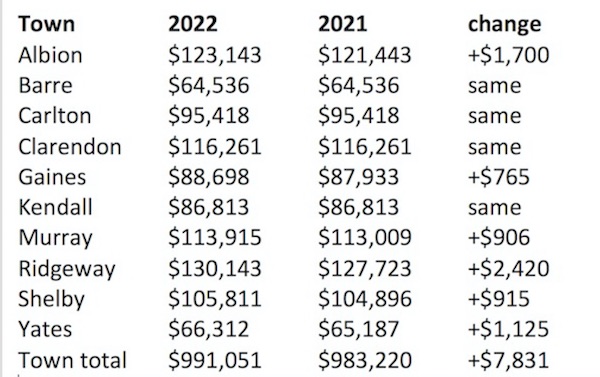 The apportionment in 2021 broke a trend in previous years where the village share grew – at the expense of the towns. But 2022 shifts more sales tax to the towns.

The county receives about $20 million in sales tax annually, and shares $1,366,671 with the four villages and 10 towns. They have been frozen at that level since 2001.

The sales tax has been on a big growth swing the past two years with more online sales tax being captured. This year’s growth also is fueled by the higher gas prices.

Once a decade the town and village amounts are set based on local population. However, each year after that the share is modified based on the assessed values of towns with villages.

The county is using some of the local sales tax to pay $290,000 in AIM payments to towns and villages that were funded by the state. The state also takes $190,274 in the county sales tax and diverts it to “financially distressed health facilities.”