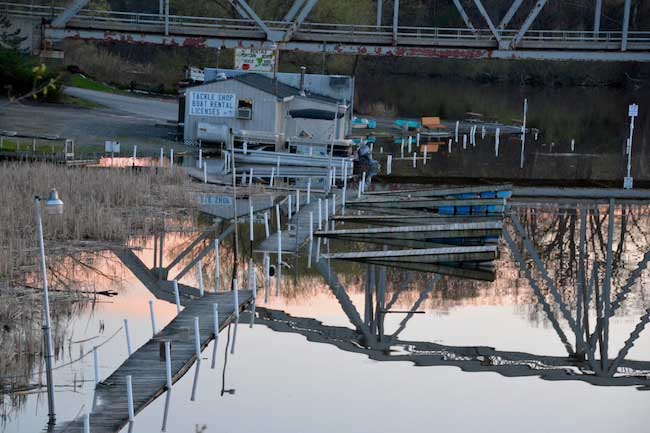 Photo by Tom Rivers: The high Lake Ontario waters are having an effect on streams and creeks as well. This photo shows the docks by Captain’s Cove in Carlton, where portions of the docks are under water. This photo was taken on Sunday evening.

Congressman Chris Collins today released the following statement after he inspected property damage at two homes along Lake Ontario’s southern shoreline and hosted a stakeholders meeting to discuss his coordinated efforts with both the Trump Administration and local officials to end the International Joint Commission’s (IJC) Plan 2014.

“Plan 2014 has been an utter disaster for Lake Ontario taxpayers and communities since it was approved in the final minutes of the Obama Administration,” said Congressman Collins. “Both the property damage and overflow of debris into Lake Ontario that I inspected today could have been avoided. I came here today to assure local officials and Lake Ontario homeowners that I am working with the Trump Administration to reform the IJC and repeal Plan 2014 as soon as possible.”

According to the United States Army Corps of Engineers, current water levels in Lake Ontario are already nineteen inches higher than average and are on track to rise another eleven inches by May 14th. The IJC’s inability to release water into the St. Lawrence River until the Lake’s “trigger level” has been reached has created significant property damage to businesses and communities along Lake Ontario’s southern shoreline. Congressman Collins and Niagara County officials toured impacted households and met with community members.

“We’re glad Congressman Collins and his staff have been monitoring this situation with us, and taking the necessary steps to make resources available to protect lakeshore residents’ safety,” said David Godfrey, Niagara County Legislator (R-Wilson). “Equally important, though, has been the Congressman’s commitment to delivering change to the International Joint Commission, and ensuring that it acts to protect the people that live along the shores of our Great Lakes and boundary waterways. Plan 2014 was a serious error on the IJC’s part and it needs to be repealed.”

Following the damage inspection, Congressman Collins hosted a meeting at the Olcott Yacht Club with local stakeholders to discuss Plan 2014 and the devastating impact it is having on Lake Ontario’s water levels, local properties and businesses. Congressman Collins took this opportunity to brief attendees on his recent work in coordination with the Trump Administration to reform the IJC and protect Lake Ontario property owners.

In January 2017, Congressman Collins and Congressman John Katko (NY-24) sent correspondence to Vice President-elect Mike Pence, to bring the issue of Plan 2014 to his attention.