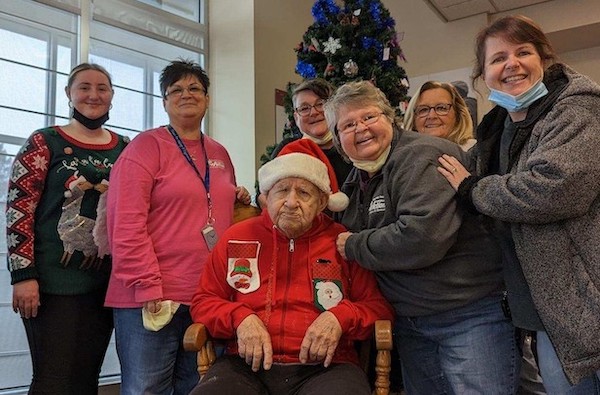 Provided photo: Medina staff of Orleans Community Action and Head Start of Batavia pose with North Wing staff after donating snacks and personal care items for the residents. From left rear are Anna Lewis from the North Wing; Marguerite Davies from Head Start; Adrienne Belson, North Wing Activities Director; and Margaret Dix, daughter of resident Charlie Goetz. In front, Goetze gets a hug from his other daughter, Christine Schuster, an employee of Head Start, who is standing next to Nicole Struble, Site and Education Specialist for Medina Head Start.

MEDINA – In years past, Medina staff from Community Action of Orleans and Genesee, and Genesee Head Start have always pitched in to donate food to local food banks and/or churches.

This year, their giving took a new direction when they contacted the North Wing at Medina Memorial Hospital to see if there were items they might need for their residents.

As a result, the Community Action and Head Start employees collected multiple items, which they donated to the North Wing. These included snacks, candy bars, lotions, deodorants, toothbrushes, toothpaste and more. Many of the items will be used as prizes when they play Bingo, said Nicole Struble, Site and Education Specialist for Medina Head Start.

The donation hit a personal note with one Head Start employee, Christine Schuster, who is the daughter of North Wing resident Charlie Goetz.