Carlton approves contract with Monroe Ambulance at $14,600 for 2023 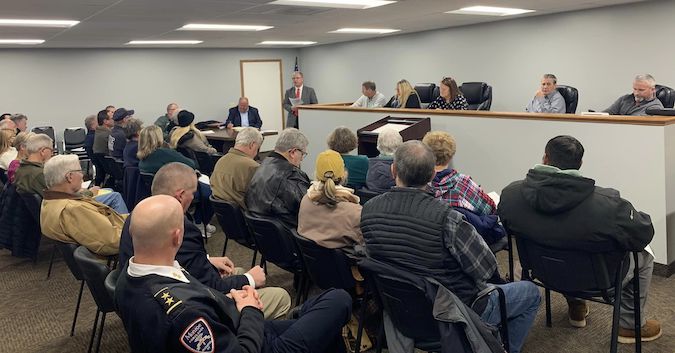 Photo by Tom Rivers: John Caufield, chief operating officer for Monroe Ambulance, discusses a proposed ambulance services contract with the Carlton Town Board and residents during a meeting this evening at the Carlton Town Hall. The Town Board members include from left: Dana Woolston, Debbie Yockel, Town Supervisor Gayle Ashbery, Brian McCue and Josh Narburgh.

CARLTON – The Town Board approved a one-year ambulance contract with Monroe Ambulance for $14,800 for 2023.

This makes Carlton part of a six-town block that will pay Monroe $181,200 for 2023. The agreement is with the towns of Albion, Barre, Carlton, Clarendon, Gaines and Murray.

Monroe agrees to station an ambulance in Albion and also in Holley as part of the deal. Monroe has been providing ambulance services in eastern Orleans at no charge to the towns, but the ambulances came from the Brockport area outside Orleans.

Mercy Flight EMS also proposed to serve Carlton at a cost of $17,000 a year with a shared ambulance with Hamlin.

Town Councilman Josh Narburgh voted for Mercy Flight. He thinks residents would get better service from Mercy Flight with the shared ambulance with Hamlin.

David Bertsch of Carlton, a long-time employee of COVA, said the contract results in reduced service for residents in central Orleans than what COVA provided. COVA had three ambulances based in Albion.

“We’re going backwards with this,” he said about the new plan for ambulance services in central Orleans.

COVA ceased operations last month and was taken over by Mercy Flight, which has agreed to keep operating in Orleans until Monroe is ready to start.

John Caufield, chief operating officer for Monroe Ambulance, said it will take Monroe about 90 days to ramp up operations in Orleans County.

He welcomed the former COVA employees to pursue jobs with Monroe to serve Orleans County.

The central and eastern parts of the county have about 3,300 ambulance calls a year with about 250 in Carlton, Caufield said. The time from 7 a.m. to 11 p.m. is the busiest for ambulance calls, he said.

Monroe was seeking $200,000 from seven towns, including Kendall. But Kendall didn’t sign a contract, saying the fire districts already had an agreement with Monroe for ambulance coverage at no cost to the town.

“I don’t find it right they get it for free and we all now have to pay,” said James Fisher, a Carlton resident who worked for COVA.

Tom Coyle, owner and president of Monroe Ambulance, said Kendall town officials “misconstrued” the agreement with the fire districts. Kendall isn’t included in the Orleans contract with the six towns, and any calls to Kendall will be served by ambulances coming from Monroe County instead of Orleans. Kendall won’t be getting the same level of service as the six towns in the agreement, Coyle said during the Carlton meeting.

Orleans County Legislator John Fitzak, a former Carlton town councilman, said an EMS task force has been meeting regularly since March. The EMS system has been “in dire straits” with a shortage of volunteers and low reimbursement rates, Fitzak said.

(The Kendall Fire Department is ending its volunteer ambulance by the end of the year. Kendall will still respond to EMS calls but won’t be doing transports.)

The changes in EMS is pushing out nearly all the volunteer-run ambulances, with many municipalities needing to pay to ensure for services.

Fitzak thanked Monroe Ambulance and Mercy Flight for both submitting proposals and wanting to serve central and eastern Orleans.

He worries that the decline in active volunteer firefighters could present a big challenge for the community in the near future.

He encouraged people to consider volunteering with their local fire department.

“If we had people to do this work we wouldn’t be in this situation,” he said.