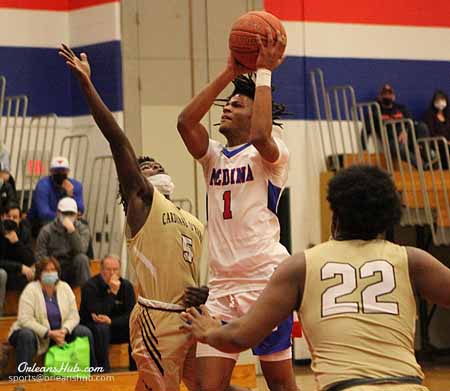 Photo by Cheryl Wertman – Medina’s Anthony Bowman puts up a shot between Cardinal O’Hara defenders Siamoria Threat and Chris Wright during the Mustangs loss to the visiting Hawks this evening.

Roaring out to a 20 point first quarter lead, Cardinal O’Hara rolled to a 73-41 win over host Medina in a non league boys basketball game this evening.

Keiyan Clarke scored 27 and Chris Wright 20 to lead the way for O’Hara which enjoyed commanding leads of 27-7 after one quarter, 42-28 at the half and 58-30 at the three-quarter mark.

The Mustangs next visit West Seneca East Thursday in another non league contest.

Burgard used a 17-10 fourth quarter scoring edge to lock up a 64-48 win over host Albion in a non league contest.

Jahmeek Riley scored 15, Aquil Gaffney 14 and Shakarim Drisdom 11 for Albion which trailed 32-29 at the half and 47-38 after three quarters.

St. Mary’s of Lancaster built up a 43-28 half-time advantage in route to downing visiting Roy-Hart 77-55 in a non league contest.