Canal will remove trees, vegetation along embankment from Medina to Rochester

This photo shows a clear embankment on the right side of the towpath, free of brush and trees. It shows the towpath and canal in Ridgeway over the Culvert, the only spot on the canal where cars can drive under the historic waterway.

The Canal Corp. in the next three months will be removing many trees, brush and vegetation on canal property from Medina to Fairport. The Canal Corp. won’t be touching any trees on privately owned land. The goal is to have canal lands look like the picture at top with a mowable slope, said Howard Goebel, deputy director for the Canal Corp.

He joined other Canal Corp. officials at a public meeting in Medina on Monday at Lee-Whedon Memorial Library to go over the plan. The Canal has hired Mohawk Valley Materials from Utica to remove vegetation on the Canal Corp. right of way.

The trees have roots that can burrow into the soil, going under the towpath and reaching the canal walls. That can make the canal vulnerable to leaks and weaken the walls, Canal Corp. officials said.

After brush, vegetation and some trees are removed, the land will be seeded and mowed. That will make it easier for Canal Corp. officials to do inspections of the embankments, to make sure there aren’t any leaks or problems, Goebel said.

The contractor will be busy in Orleans and Monroe counties this fall, working on about 140 acres.

“There is a lot of undergrowth here,” Goebel said.

Mohawk Valley will be working on the project for about three months. The Canal Corp. will also be holding public meetings in Brockport on Oct. 4 and in Pittsford on Oct. 26. 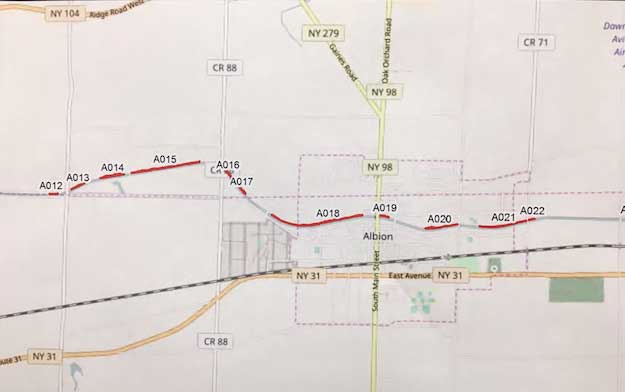 The red lines show spots on the canal in Albion where contractors will be removing vegetation, brush and trees from the canal embankment.