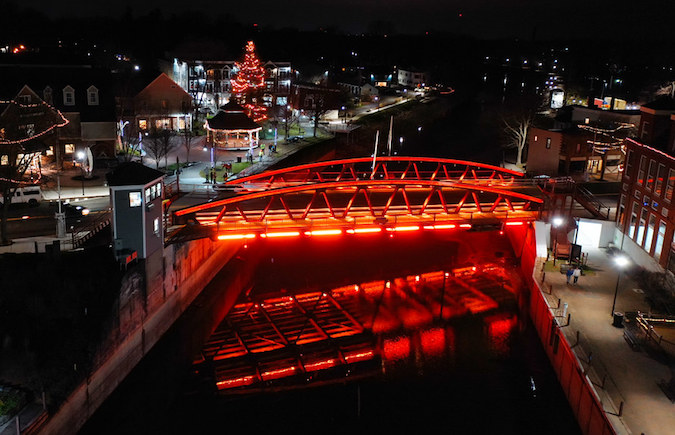 Photo by Philip Kamrass, New York Power Authority: The lift bridge in Fairport has been illumined as part of the state’s “Reimagine the Canals Initiative.” None of the canal bridges in Orleans County are currently planned to be lighted in a similar way.

FAIRPORT – One of the state’s iconic lift bridges has been illumined as part of the “Reimagine the Canals” Initiative to boost tourism and draw attention to the historic waterway.

The LED lights were turned on the Fairport lift bridge on Tuesday. The State Canal Corp. also illumined two Oneida Lake lighthouses – one in Brewerton in Oswego County and another at Verona Beach in Oneida County.

The Canal Corp. doesn’t currently have plans to light up a bridge in Orleans County, which is home to seven of the 16 lift bridges. The next structure to be illumined will be on the eastern end of the Erie Canal in Herkimer County and should debut in the late spring/summer, said Shane Mahar, Canal Corp. spokesman.

“These key pieces of infrastructure helped us to build the New York we have today, and the new lighting features welcome New Yorkers and visitors alike to pause and recognize their crucial influence on our state’s history – and future,” said Brian Stratton, Canal Corp. director. “The illumination of these iconic structures enhances the communities along the canal and literally shines light onto our canal infrastructure for all to enjoy.”

The canal is nearly 200 years old. It opened in 1825. The state has looked for ways to better utilize the waterway, and that has included more irrigation for agriculture and supplementing tributaries with water until mid-December to boost fishing.

Opening day of the 198th consecutive season of navigation on the canal system is scheduled for May 20, 2022.