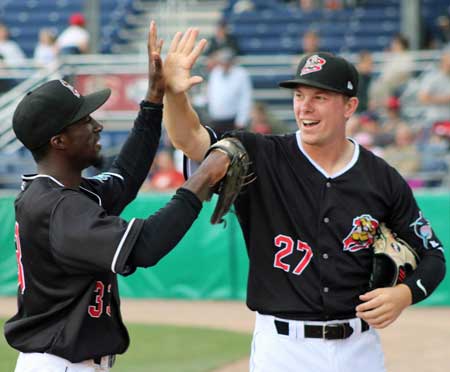 Contributed Photo – Milton Smith II gives a high-five to Troy Johnston (27), who hit his second home run of the season for the Batavia Muckdogs on Wednesday night. Johnston had two hits in the loss for the first-place Muckdogs.

MORGANTOWN, W. VA. – Nic Ready hit two home runs in a Muckdogs win on Tuesday, and two home runs were not enough on Wednesday for Batavia as they fell to the West Virginia Black Bears, 8-2.

Troy Johnston belted his second home run of the season for Batavia and shortstop Dalvy Rosario hit his first of the season. Both were solo shots. Johnston, a 17th round pick of the Miami Marlins this year out of Gonzaga had two hits.

Eli Villalobos took the loss for Batavia, throwing the first 2.2 innings, giving up three runs and he struck out four.

Brock Love and Joey Steele once again had strong outings in relief for the Muckdogs and both have an ERA of 0.00 on the season.

Love, a 34th round pick of Miami this year from Alabama, went 1.1 innings of perfect baseball and struck out one.

Steele, a 30th round pick this year by there Marlins out of the University of San Francisco, tossed the eighth and struck out two without giving up a walk or a run.

Jackson Rose, a 2018 draft pick, threw three innings and struck out six without allowing a walk.

Batavia is now  24-15 and three games up on second place West Virginia (20-17) in the NYPL Pinckney Division. Third place State College also lost, and dropped to 19-20 with Mahoning Valley jumping ahead at 20-19. The Muckdogs are back in a battle with Lowell (23-13) for the best overall record in the league.

Batavia playsthis evening at West Virginia and returns toDwyer Stadium in Batavia Friday, Saturday and Sunday. On Friday when the Muckdogs host Williamsport.