Photos by Tom Rivers: Santa Claus heads down Main Street on a 1936 Ford truck during the Strawberry Festival Parade.

We wish to thank all those who helped us with our participation in the Strawberry Festival.  Special thanks to Dan Parker for again letting us take advantage of his 1936 Ford truck.  Circumstances were not favorable, but he came through and carried Santa and his sleigh like the community minded person he is.

Special thanks and appreciation to Jacquess and Eugene Harrison, who—along with Kaleigh Albanese—led the procession with a banner identifying Jane Holland as parade marshal.

We owe Jane—Charlie Howard’s granddaughter—all sorts of gratitude for making this year’s parade unusually memorable.  And, of course, what would the event have been without Santa?  Keep in mind that he is busy even at this time of the year.

Albion Central and Mr. Simboli were generous enough to allow us use of the drama department’s appropriately regal chair, making it possible for Santa to greet his fans in a manner befitting his extraordinary approval ratings.

Bruce Landis loaned us a backdrop for the canopy Brooke Albanese once again made available, just in case some parents wished to get some photos of their children and Santa dressed in his summer attire.

Of course, Santa always feels more comfortable riding in a sleigh. Thanks to the generosity of Jim and Linda Babcock, the parade reminded some of a longer journey Santa embarks on toward the end of the year.

Those we overlooked and everyone who helped should feel they contributed to a great event. 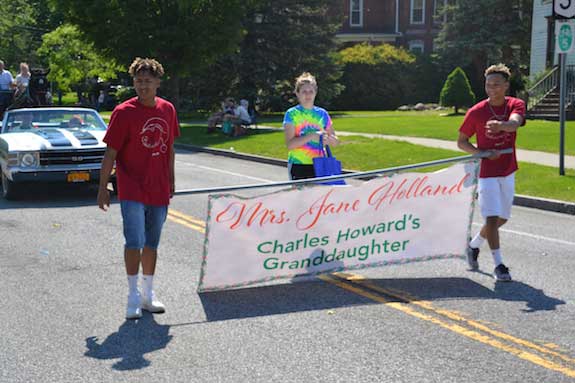