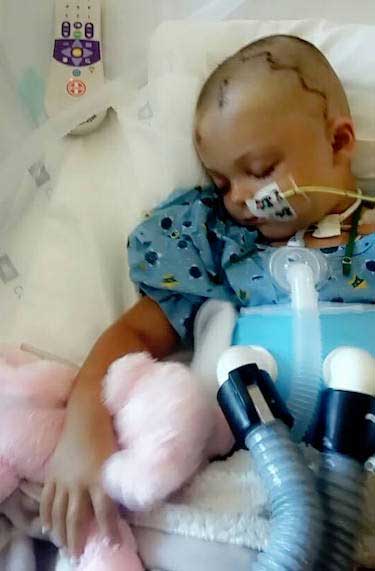 Ariana Star Grosskopf, 3, of Albion is recovering from injuries from an Aug. 30 car accident.

ALBION – Ariana Star Grosskopf, 3, is making progress in her recovery from serious injuries in an Aug. 30 car accident in Spencerport.

Ariana suffered fractures to her face and has needed facial reconstruction surgery. She is moving and has opened her eyes, said family friend Nicole Brown, who has helped organize a fundraiser on Sunday at Junior Wilson’s Sportsman Club in Medina, 3875 Bates Rd.

Ariana is scheduled to be moved Thursday from Golisano Children’s Hospital in Rochester to Unity’s rehab center.

Ariana, the daughter of Renee Miens and Josh Grosskopf, was injured in a 3-car crash on Aug. 30 on Route 31, just before Route 531. A GoFundMe established to help with her medical bills says Ariana didn’t suffer brain damage. (Click here for more information on the GoFundMe.)

The fundraiser on Sunday includes a car show from noon to 4 p.m. with half of the $10 entry fee for the show going to the fundraiser and the other half to the winning car (to be picked by Ariana’s older sister Brooklyn).

The event from 1 to 5 p.m. includes a spaghetti dinner, a big basket raffle, and live music.

There are also T-shirts, decals and bracelets available for purchase to raise funds for Ariana’s care.