By Matthew Ballard, Orleans County Historian Posted 9 September 2017 at 8:45 am 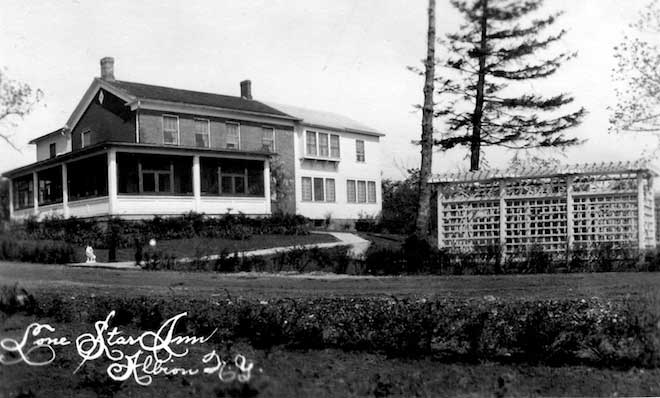 ALBION – This photograph taken in the 1920s shows the Lone Star Inn as it appeared on Gaines Basin Road. Located on the old Thurston Farm, this property was located across from the current Orleans County Correctional Facility on 130 acres adjacent to the Howard farm.

In 1923 Lewis E. Sands established the Lone Star Inn, a “quaint homestead with glass enclosed verandas, set on a knoll a few hundred yards off the Million Dollar Highway.” Directions to the property instructed visitors to turn “at the cobblestone schoolhouse,” the old Loveland School since demolished near the intersection of Rt. 31 and Gaines Basin Road. The restaurant quickly earned a reputation as a destination for high quality meals in Orleans County.

In November of 1930, Sands was operating a bakery out of the building in addition to the restaurant and inn during the summer months. While working in the kitchen, Lewis heard a faint crackling sound coming from the garage and after further investigation, was greeted by flames and smoke upon opening the door. He fetched his helper, Walter Waters, and the two men were quickly flushed out into the near-zero temperatures without adequate clothing to keep them warm.

The Albion Fire Department responded to the blaze, but found it difficult to contain the fire due to a lack of water. Newspapers reported that Sheriff Lawrence Higley was the first official at the scene, entering the building periodically to rescue various pieces of furniture. It was expected that the fire would cost Sands nearly $3,500 in personal loss in addition to the over $15,000 in damage to the property. Although several other fires occurred within the vicinity, leading residents to suspect a fire-bug was to blame, Sands admitted that the electrical wiring in the garage was shoddy at best and likely the cause of the fire.

For many years, Lewis Sands was regarded as the “Bean King,” cornering the bean market in this region until his business collapsed around 1924. His business interests had amassed debt nearing the $1,000,000 mark, which resulted in charges of grand larceny and forgery being brought against him on several occasions. Although his personal secretary, Grace Gerkes, was convicted of forgery and sentenced to time at Auburn Prison, Sands was acquitted of charges on two occasions.

Despite his poor luck in business, Sands was well respected within the community as a charter member of the Albion Rotary Club, often volunteering the use of his personal car to take crippled children to out-of-town clinics. While tending to his greenhouses in Rochester, he suffered a massive heart attack and died shortly after on January 23, 1942.

His son, Harold Sands, who took over operation of the Lone Star Inn when his father fled Albion in the face of bankruptcy, was killed in an altercation at Benn’s Grill on Winton Road in Rochester on October 11, 1942. After engaging a semi-pro football player named Pierson Thompson in a heated argument over clothing, Harold invited Pierson outside to settle the disagreement. Thompson obliged and struck Sands once in the head, fracturing his skull and killing him.