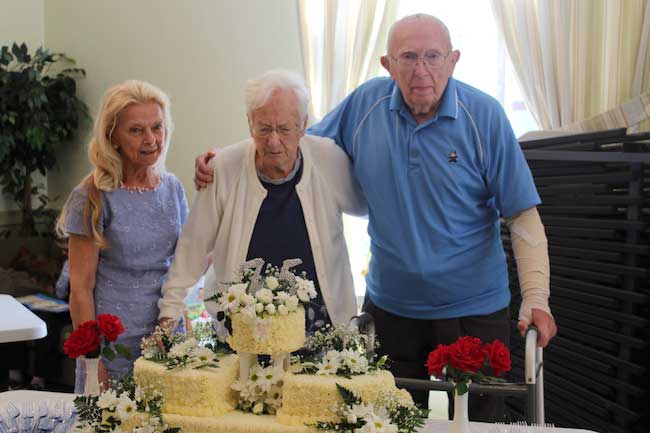 Provided photo: Don and Bernadine Ross are pictured with their daughter Deborah Ross during a celebration for their 75th wedding anniversary. The First Presbyterian Church in Albion treated the couple to a party after church today.

ALBION – The secret to staying happily married for 75 years: “Being able to give both ways.”

That is the advice from Bernadine Ross. She and her husband Don are celebrating their wedding anniversary on Tuesday, June 13.

“You have to give in, and he gives in,” Mrs. Ross said about her husband.

Mr. Ross, 97, was in the plumbing business for 40 years before selling Albion Plumbing and Heating to Doug Bower in 1983.

Ross graduated from Rochester Institute of Technology in 1942 with an electrical engineering degree. He worked for a canning company in Barre and GLF, the precursor of Agway, before getting into the plumbing business. His wife worked in the office at Albion Plumbing.

The Rosses built a home in the late 1950s in Barre. They grew up in Medina and were married in a ceremony at Mrs. Ross’s parents’ house.

Mr. Ross said he was fortunate to work side by side with his wife.

The couple’s daughter, Deborah Ross of Carlton, said they have been unwavering in supporting each other.

“They are very old-fashioned,” she said. “When you get married, you stay together through thick and thin.”

Mr. Ross has been very active with the Masonic Lodge for 74 years. He also was an active member of the Cobblestone Society, the Elk’s Club and Nutri-Faire.

Tim McGee has been in the Masons with Ross for the past 18 years. The couple is admired by many.