Assemblyman Hawley to be honored for support of harness racing

BATAVIA – The Upstate New York Chapter of the United States Harness Writers Association is pleased to announce that Assemblyman Steve Hawley is the recipient of their 2021 President’s award for his strong support of the harness racing industry and the agricultural jobs it helps to sustain. 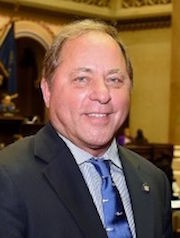 “I have known Steve for a long time and have witnessed first hand his passion for this community and his appreciation for the sport of harness racing,” said Tim Bojarski, President of UNY-USHWA. “He genuinely understands the intricacies of the business and how hard our horsemen and horsewomen work to ensure the well-being of our horses while earning a living in a very difficult industry. He fights to keep the sport healthy so it’s economic impact on agriculture can continue in the area and supports Batavia Downs gaming as its revenue continues to support local communities. Our organization is proud to present him with this gesture of our appreciation.”

Hawley is a Batavia native and grew up there before leaving to attend college at the University of Toledo and then serve in the Army National Guard and Army reserves. When he returned home, he became the owner/operator of Hawley Farms and also owned and managed a property and casualty insurance company for over 35 years.

Always working for the betterment of the community as a businessman, Hawley wanted to take it one step further and successfully ran for office in the 139th New York Assembly District in 2006 and has been proudly serving his constituents ever since.

As a businessman, Hawley always had a friendly acquaintance with Batavia Downs and brought friends and customers there for dinner and to see the races and through his visits he grew to understand how integral the sport of harness racing was to the agricultural infrastructure in Genesee and surrounding counties. So as a politician he has been a staunch supporter of the track and its principles ever since he has been in office.

Over the years Hawley has served on many committees while in office including the racing and wagering committee and currently the agriculture committee and in those positions, always fought hard to protect the people that racing employs both directly and in supporting industries.

Outside of Albany, Hawley continues to be a friend of the track first hand as over the years he regularly participates in promotions like celebrity races and fundraisers for various worthy causes throughout the year.

And since 2010 Hawley has sponsored his “Night At The Races” at the Downs and in the 11 years it’s been held, has brought thousands of people who otherwise might not have ever come to the track and introduced them to the sport that has been a mainstay of the economic fabric of Batavia for over eight decades.

“Throughout the years, Steve has been a champion not only of Batavia Downs but of the entire racing and gaming industries,” said Henry Wojtaszek, President and CEO of Batavia Downs Gaming and Hotel. “He has introduced many people to our historic race track all while supporting legislation that helps the people of New York who work for the casinos and tracks and it’s through Steve’s hard work that our industry continues to grow and prosper. We congratulate Steve on receiving this well-deserved award.”

For his outstanding service to the sport of harness racing, Steve Hawley will be presented this award in the Purple Haze Winner’s Circle at Batavia Downs on Saturday (Dec. 11) during UNY-USHWA’s Night of Distinction. Saturday is the final night of the meet and post time is at 5 p.m.