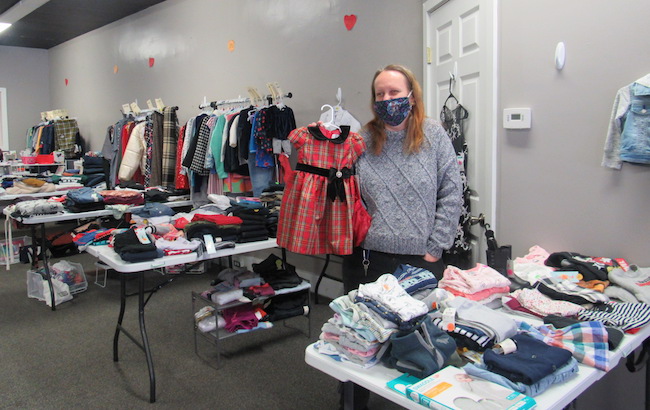 Photos by Ginny Kropf: Lynn Palmer, owner of Upscale Overstock, displays some of sports clothing and memorabilia she has in her store in Albion in this file photo from February 2021. She credited a microenterprise assistance program for helping her with her business.

ALBION – The Microenterprise Assistance Program has graduated more than 540 prospective business people since its inception, but few have a more poignant story than Lynn Palmer.

At the November MAP graduation, Palmer shared her story of despair and how she has risen above it after completing the MAP.

Palmer not only started a new business, Upscale Overstock on Main Street in Albion, but she was one of seven applicants who received special grants. Palmer received $15,000. 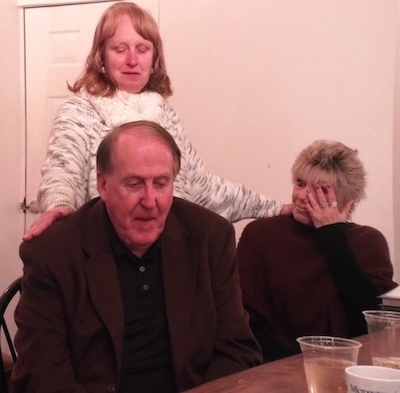 Diane Blanchard, right, coordinator of the Microenterprise Assistance Program, wipes her eyes after hearing Lynn Palmer tell her heartbreaking story of being down and out and how she has fought her way to success. Palmer hugs MAP mentor Jon Costello and Blanchard at the recent MAP graduation.

“I cannot say enough about the Microenterprise Assistance Program,” Palmer said. “Twelve years ago I was a single mom of three children who were 20, 17 and 15 at the time. I had raised them by myself since the youngest was 4.”

She shared how when she became pregnant with her last child she was determined to do whatever she needed to keep that baby. She was living in a very small house, but was able to find a five-bedroom home in Medina whose landlord was willing to rent to her. After a year, the rent was increased to $1,200 a month and Palmer couldn’t afford it.

“I had a degree in early childhood education, so I asked the owner if I could license it as a day care center,” Palmer said.  “When I opened, I had a waiting list, so I thought why not re-license it for 16 children and hire some help.”

Then she learned the property owners were not keeping up with the mortgage and she was going to lose everything.

She was able to find space at Towne School, but she had to have a teacher and aide in each room, plus two substitutes. She would have had to pay 20 employees and she couldn’t do it.

“I closed and became depressed, suicidal,” Palmer said. “I took a job in a day care center in Batavia making minimum wage, and went to work at Walmart part-time. It was just paying the  bills.”

Palmer began to think she would like to be a business owner again. Her dream was to own a bar and grill with a game room, but she was looking at $250,000.

“I thought long and hard,” she said.

Her daughter, 22, by then was selling overstock merchandise and traveling to cities all over the county, making a good living.

“The timing was terrible,” she said. “On Nov. 30, I opened Upscale Overstock in Medina and three months later Covid shut us down.”

To stay afloat, Palmer’s daughter began making face masks and sanitizer. There was such a demand, she couldn’t make them fast enough. Praising Kids, a child care center in Medina, and Orchard Manor each ordered enough for all their employees.

Palmer tried to apply for a PPE grant to see her through, but because she hadn’t been in business three years she was not eligible. She went to work at Walmart again until June, when she was able to start up her business again.

Her lease in Medina was up at the end of October, and her daughter had seen a “for rent” sign on a store front in downtown Albion.

“A year ago, I would have laughed if you told me where I’d be today,” Palmer said. “I have a bigger store for less rent. I’m next door to a bank and when people cashed their stimulus checks, they came into my store and spent it.”

Her sales in the first month there tripled, she said.

In the spring she got a call from Diane Blanchard, coordinator of the MAP, telling her there was a grant available.

“I wanted to apply, but my computer was 15 years old and my credit was not perfect,” Palmer said.

“Jon sat down with me for hours and helped me,” Palmer said. “But I knew I wasn’t going to get the money.”

Then the day came when Blanchard contacted Palmer and told her to check her e-mails.

She called Costello, who congratulated her. She was able to buy a new computer, shelving for her store, a pallet jack cart, and the rest she spent on inventory.

“I’m making more at the store than I did at Walmart,” Palmer said. “If anything, this pandemic has taught me to be prepared. For the first time in my life, I have money in the bank. My credit cards and student loan are paid off. My car is paid off. I have no debt. I cannot say enough about this MAP program.”